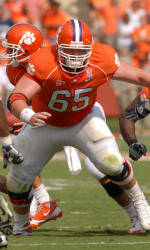 CLEMSON, SC – Clemson senior Thomas Austin and DeAndre McDaniel were both named to the third team.

A finalist for the Doak Walker Award, Spiller had 233 yards rushing in 20 attempts and scored a career high four touchdowns in the ACC Championship game against Georgia Tech on December 5. He now has 1,145 rushing yards this year and 445 receiving yards. He has 50 career touchdowns and needs just one to become Clemson’s career leader. He finished sixth in the voting for the Heisman Trophy, the highest finish for an ACC player since 2000.

Spiller, who will graduate from Clemson on December 17 with a degree in sociology, has 21 career touchdowns of 50 yards or more, including nine this year. McDaniel, a junior from Tallahassee, FL, has eight interceptions to rank second in the nation and first in the ACC. He needs just one more to establish the Clemson single season record. He has been the leader of a Clemson team that ranks third in the nation in interceptions and 11th in pass defense.

McDaniel has 87 tackles from his safety position, including two sacks. He has 10 total passes defensed. He was named National Defensive Player of the Week for his performance at Miami in Clemson’s 40-37 overtime victory. He had two interceptions in that game, including one that he returned for a touchdown.

Austin was the leader of Clemson’s offensive line this year. The graduate student from Camden, SC has 102 knockdown blocks this year to lead the team. He has started 37 consecutive games over the last three years and is a big reason Clemson ranks in the top 25 in the nation in scoring. The Tigers have scored at least 34 points in seven of the last eight games.