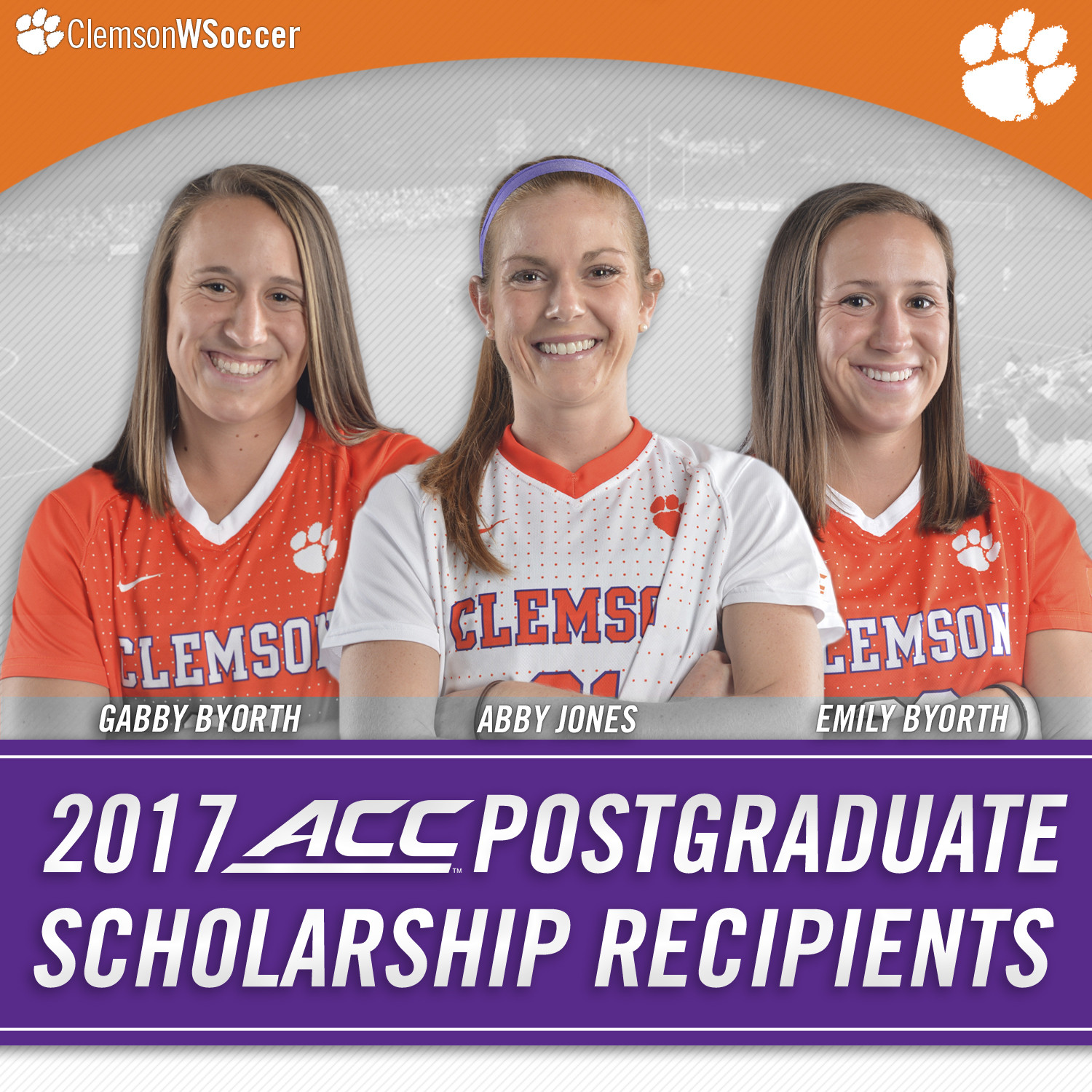 This is the first time Clemson has ever had three student-athletes from the same sport earn the ACC postgraduate scholarship in the same year. In fact, it is only third time in school history that one sport has had multiple award winners, as previously, volleyball in 2013 and men’s soccer in 2014 had two award recipients each.

The Byorth’s and Jones, all three of whom were team captains in 2016, were part of a senior class that helped Head Coach Eddie Radwanski and his staff return the Clemson women’s soccer program to national prominence over the last four years. They went from finishing 10th place in the ACC regular season in 2013, to fifth in 2014, to a tie for second in 2015, to being ACC Regular Season Co-Champions in 2016. The class also went from not earning an NCAA Tournament bid in 2013, to receiving a bid in 2014 with a first-round exit, to advancing to the NCAA Second Round in 2015 to reaching the NCAA Sweet 16 as seniors in 2016.

In addition to the Byorth twins and Jones, Clemson football’s Deshaun Watson was also among the award winners for 2017, as he received the Weaver-James-Corrigan Honorary Award, for student-athletes planning to pursue professional careers in their sports.

The four Clemson student-athletes, along with the 50 other ACC student-athlete award recipients, will be honored at the annual Cone Health ACC Postgraduate Luncheon on April 12, 2017. The luncheon is hosted by the Nat Greene Kiwanis Club and presented by ESPN at the Sheraton Four Seasons Hotel Imperial Ballroom in Greensboro, N.C.

Emily Byorth; Clemson; Health Science; Women’s Soccer; Dublin, OhioEmily Byorth, a native of Dublin, Ohio, was a four-year starter on defense for the Clemson women’s soccer team, a defense which improved dramatically over her four seasons with the program. In 2016, the Tigers allowed just 17 goals in 23 games for a 0.71 team goals against average. Despite playing a defensive role, Byorth also contributed to the Clemson offense in 2016, scoring three goals and two assists for eight points. Byorth is a two-time CoSIDA Academic All-American, as she was named to the First Team in 2016 and the Second Team in 2015. The 2016 team co-captain was also a three-time member of the All-ACC Academic Women’s Soccer Team, in 2014, 2015 and 2016.

Gabby Byorth; Clemson; Health Science; Women’s Soccer; Dublin, Ohio.Gabby Byorth started all 80 games of her four-year Clemson soccer career. The product of Dublin, Ohio played a primary role in the Tigers’ improvements on defense over her four years, culminating with a 2016 season in which the team allowed its opponents to score just 17 goals in 23 games for a 0.71 goals against average. Although she played on the back line, Byorth also picked up 12 assists throughout her career as a Tiger. Byorth, who was a team co-captain for the Tigers last season, earned her first career All-ACC Academic Team nod as a senior in 2016.

Abby Jones; Clemson; Health Science; Women’s Soccer; Auburn, Ala.Abby Jones excelled on the soccer field, in the classroom and in the community throughout her Clemson career. On the field, the Auburn, Ala. native played in 77 games, starting 60, in the midfield, scoring five goals and eight assists over her four years. In the classroom, she was a two-time member of the All-ACC Academic Team, in 2015 and 2016. A nominee for the 2016 Senior CLASS Award, Jones was a three-year member of Clemson’s Student-Athlete Advisory Community, serving as president in 2016-17. Perhaps her biggest contribution in the community was the Palmetto Series Canned Food Drive, a competition between Clemson and rival South Carolina in which canned foods are collected to benefit local food banks. Jones came up with the idea for the food drive, and was the primary organizer and director of the project.

ABOUT THE AWARDSThe Weaver-James-Corrigan and Jim and Pat Thacker postgraduate scholarships are awarded to selected student-athletes who intend to pursue a graduate degree following completion of their undergraduate requirements. Each recipient will receive $5,000 toward his or her graduate education. Those honored have performed with distinction in both the classroom and their respective sport, while demonstrating exemplary conduct in the community.

The Weaver-James-Corrigan Award is named in honor of the late Jim Weaver and Bob James, as well as Gene Corrigan, the first three ACC commissioners.