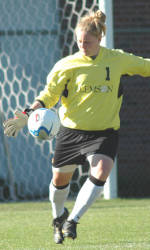 Twenty-three student-athletes from nine Atlantic Coast Conference schools highlight the 2007 All-ACC Women’s Soccer Team. Virginia totaled five all-conference selections to lead the league. Wake Forest placed four on the team, while defending champion North Carolina and Clemson each had three. Duke, Miami and Florida State each landed a pair of all-leaguers and N.C. State and Virginia Tech rounded out the All-ACC contingent with one apiece.

Phillips, a senior from West Peabody, MA was named to the All-ACC first team. The Lady Tiger goalkeeper has given up only 13 goals in 17 games in 2007. She has 72 saves on the season and 310 for her career, a figure that has put her in first place in Clemson history for career saves. This is Phillips’ third straight all-conference honor, as she was named to the league’s second team in 2005 and 2006. Phillips was named an All-American by the NSCAA and Soccer Buzz in 2006 and was a member of the Hermann Trophy Preseason Watch List for 2007.

Jobe also earned her third all-conference honor in 2007, as the senior was named to the league’s second team in 2006 and earned All-ACC Freshman Team honors in 2004. The native of Roswell, GA has anchored the 2007 Lady Tiger defense that has allowed just 17 goals in 18 games on the season. Jobe has also tallied four goals and two assists for 10 points, including the game-winning goal in the 1-0 win over Duke on Senior Day in Clemson’s final regular season game.

Bolt was named to the All-ACC second team for the second consecutive season. The junior midfielder from Charleston, SC has recorded three goals and four assists for 10 points on the 2007 season.

The Lady Tigers will face North Carolina in the quarterfinal round of the 2007 ACC Women’s Soccer Championships on Wednesday, November 7. Clemson, the tournament’s eighth seed, will face the top-seeded Tar Heels at 12:00 p.m. at Disney’s Wide World of Sports Complex in Lake Buena Vista, FL. Clemson has a 9-4-5 overall record and a 2-3-5 mark in the ACC and is ranked 23rd nationally according to Soccer Buzz.