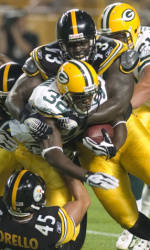 Butler has played in four games as a rookie with the Steelers in 2010. He has recorded one tackle as a cornerback and special teams player. Butler is a rookie who was a starter on Clemson’s Atlantic Division Championship team of 2009. Butler is trying to join Trevor Pryce (1997) and William Perry (1985), as the only former Tigers to win a Super Bowl Championship Ring in their rookie year.

Grisham has been on the Steelers Practice Squad all year. He played in four games last year and caught one pass.