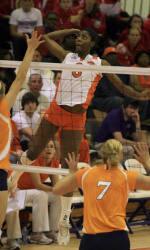 CLEMSON, SC – Clemson volleyball players Danielle Hepburn, Lia Proctor were named to the AVCA All-East Region team, as announced by the American Volleyball Coaches Association on Wednesday. Hepburn was the lone three-time honoree on the 14-member team, while Murphy earned her second straight award and Proctor was named all-region for the first time in her career.

The accolade adds to Hepburn’s lengthy list of career honors. The senior from Miami, FL was chosen as the 2008 ACC Player-of-the-Year last week for her third All-ACC selection and has been named AVCA Honorable Mention All-America twice (2008 awards will be announced later this month).

Hepburn broke school career records for total blocks, block assists, blocks per set and hitting percentage in 2008; and her season hitting percentage of .391 ranked second in school history, trailing only her own .395 clip from 2007. She led the 2008 Tiger squad in kills (472) and blocks (182) while her kills and blocks per set figures ranked first in the ACC and her blocking average (1.50) is second-best nationally.

Murphy earned her second straight all-region honor after leading the Tigers to a 23-10 overall record. The junior setter tallied 1,311 assists in 2008 while guiding the Clemson offense to a .262 team hitting percentage that ranked third in school history. Murphy moved into third place on Clemson’s career assist list with 3,859 and owned a 10.83 assists per set figure in 2008. A native of New Lenox, IL, Murphy also totaled 131 blocks and 316 defensive saves in 2008 with a team-best 27 service aces.

Proctor, a junior from Inman, SC, picked up her second career post-season honor after being named second-team all-conference. The outside hitter ranked second on the team with 420 kills and fourth in the conference with 3.50 kills per set average. In her first season playing a full rotation, Proctor has also tallied 329 digs and 26 aces with 47 total blocks. She hitting a .241 clip in 2008 to increase her career figure from .182 entering the season to a .206 percentage.