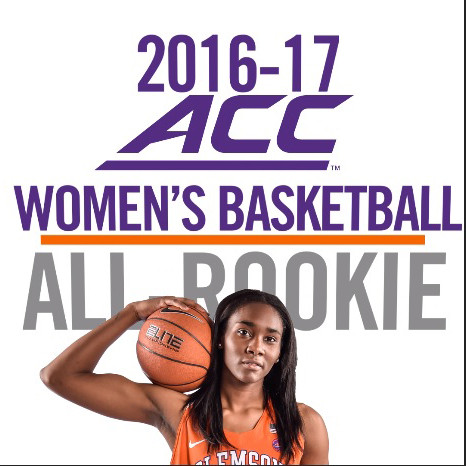 CONWAY, S.C. – Clemson’s Kobi Thornton has been named to the 2017 ACC All-Freshman Team, as announced by the Atlantic Coast Conference and voted on by the league’s Blue Ribbon Panel on Tuesday afternoon, the eve of the first round of the conference tournament. Thornton, a post from Shellman, Ga., is the first Clemson player to earn ACC All-Freshman Team honors since Nikki Dixon claimed the league’s rookie award in 2012, and the first in Head Coach Audra Smith’s tenure with the Tigers.

Thornton is fourth on the Clemson team in scoring average (9.0 ppg) and second in rebounding average (5.8 rpg). She leads the Tigers in blocked shots, with 32 (1.3 bpg) and also leads the team in field goal percentage (.538, 91-169). Thornton ranks in the top-10 among all players in the Atlantic Coast Conference in several statistical categories. She is fifth in the conference in offensive rebounding, with a 3.1 per game average, while her blocked shots per game number is seventh and her field goal percentage is eighth.

Thornton and the rest of the Clemson team open play in the first round of the 2017 ACC Tournament on Wednesday, March 1 vs. Virginia Tech. The game between the Tigers, the No. 12 seed, and the Hokies, the No. 13 seed, tips off at 1 p.m. at the HTC Center in Conway, S.C.