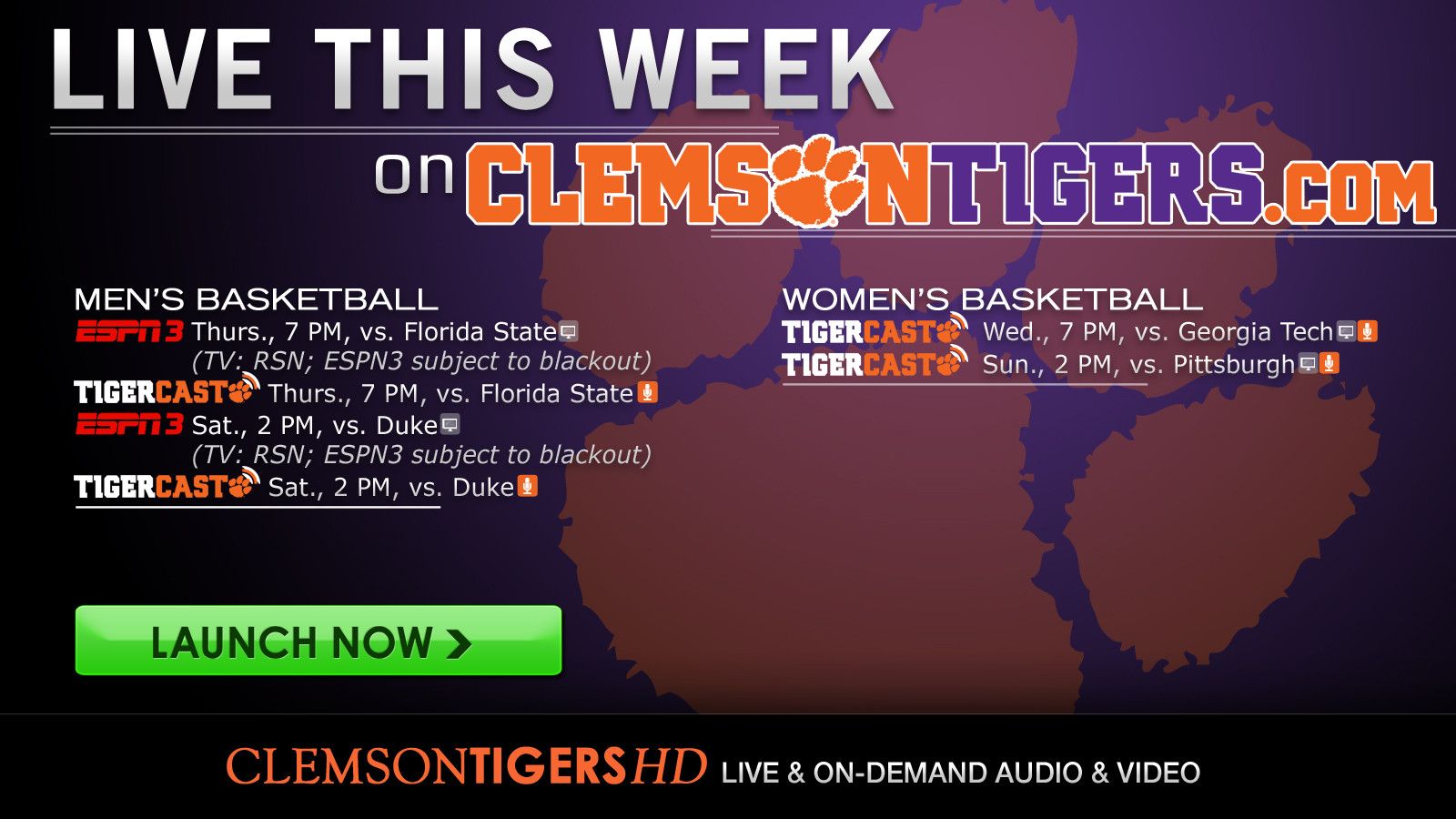 Wednesday, Jan. 87 p.m. – Women’s Basketball vs. Georgia Tech (TigerCast)Pack the House Night: $3 tickets for everyoneStudent Appreciation Night:  Free Clemson gloves for the first 500 students when you show your CUID at the East Gate of Littlejohn.  One student will have a chance to win a roundtrip airline ticket anywhere Southwest flies!

Thursday, Jan. 97 p.m. – Men’s Basketball vs. Florida State (RSN)$10 Youth Tickets; Free hotdog and soda for the first 1,000 students; One student will have a chance to win a flat screen TV!

Baseball (@CUTigerBaseball)On Friday, Jan. 3, Jack Leggett was inducted into the ABCA (American Baseball Coaches Association) Hall of Fame in Dallas, TX during its annual convention.  Clemson will begin preseason practice on Friday, Jan. 24 in preparation for its season-opener against Eastern Michigan on Friday, Feb. 14.

Men’s Basketball (@ClemsonMBB)Record: 10-3, 1-0 ACCThe Tigers moved to 10-3 on the season with victories over VMI and Boston College last week. Clemson opened ACC play with a 62-60 victory over the Eagles on the road, their second win in Conte Forum. Jordan Roper led all players averaging 17 points per game for the week. K.J. McDaniels led the way with 16 points and nine rebounds at Boston College. The Tigers host a pair of games at Littlejohn Coliseum this week, Florida State on Thursday at 7 p.m. and Duke on Saturday at 2 p.m.

Women’s Basketball (@ClemsonWBB)Record: 8-7, 0-1 ACCThe women’s basketball team earned a 47-point victory at NJIT on Thursday led by 24 points from Nikki Dixon. The Tigers then returned home before going back on the road in the first-ever meeting with Notre Dame. Clemson hung with No. 2 Notre Dame on their home floor, trailing by just 11 points with seven minutes to play, but the Irish pulled away for a 71-51 victory. The team spent the night in South Bend due to severe weather conditions, and is returned Monday afternoon. The Tigers are back in action on Wednesday at 7 pm in Littlejohn against Georgia Tech.

Diving (@ClemsonDiving)The women’s diving team kicked off 2014 at the Georgia Diving Invite this past weekend. Jessica Resler turned in the highest Clemson finish of the weekend coming in 10th in the platform event on Sunday. Emily Howard led the Tigers in the one-meter event finishing 19th with a score of 241.40. Juliana Melchionda also turned in a solid performance to lead the Tigers in the three-meter event with a score of 251.60 to finish 21st overall. This was the final invitational of the season for the Tigers. They will return to the pool on January 18 when they host College of Charleston and Western Kentucky in a dual meet.

Football (@ClemsonFB)Final Record: 11-2, 7-1 ACCThe Clemson football team closed its season with a thrilling 40-35 victory over Ohio State in the 2014 Discover Orange Bowl.  Ohio State was ranked sixth by USA Today and seventh by the BCS entering the bowl season and the victory made Clemson the only school in the nation to defeat a top 10 BCS team in a bowl game each of the last two years. The victory also gave Clemson an 11-2 season record, marking the first time Clemson has had consecutive 11-win seasons.

Sammy Watkins earned MVP honors after grabbing 16 catches for 227 yards and two scores.  The 16 receptions and 227 yards were not only Clemson single game records, they were Orange Bowl records. The bowl dates to 1935.  Watkins also became Clemson’s career leader in receptions (240) and season receptions (101) with the performance.

With all the offense it was the defense that made the plays in the last two possessions.   Spencer Shuey recovered a fumble and Stephone Anthony had an interception on Ohio State’s final two possessions to give Clemson the 40-35 victory.