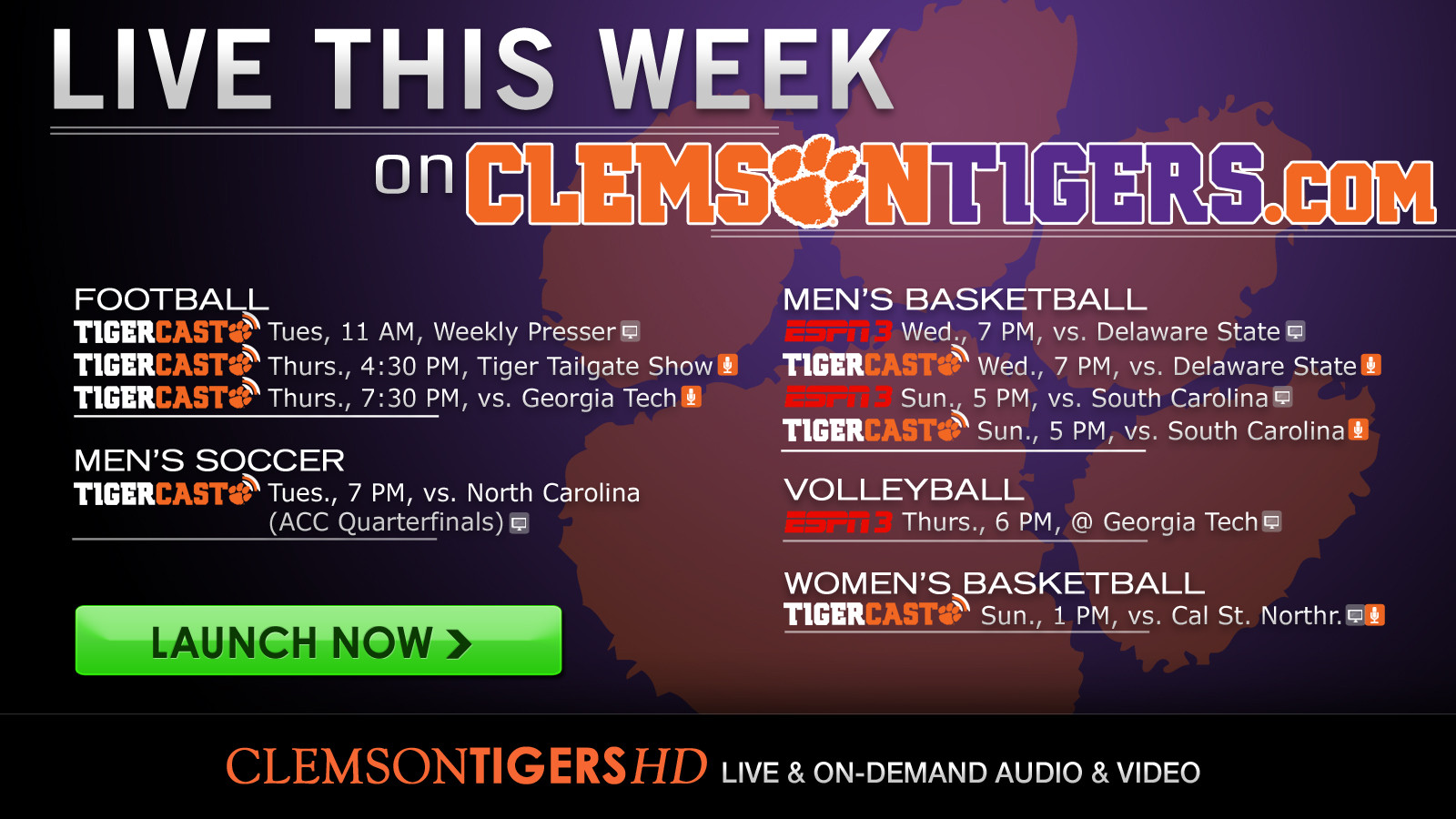 Tuesday, Nov. 127 p.m. – Men’s Soccer vs. North Carolina – ACC Quarterfinals (TigerCast)Free scarves for the first 200 fans, Tickets are $8 for adults, $5 for youth/seniors, and FREE for students

Men’s Basketball (@ClemsonMBB)Record: 1-0The Tigers won their 29th straight season opener on Friday, Nov. 8 with a 71-51 victory over Stetson. Clemson held the Hatters to just 15 first-half points and made 10-23 from three-point distance. K. J. McDaniels led the way with a career-high 20 points. Clemson play twice at home this week, first on Wednesday versus Delaware State and Sunday against South Carolina.

Women’s Basketball (@ClemsonWBB)Record: 1-1The women’s basketball team opened up the 2013-14 season with a split. After dropping the season-opener on Friday, the Tigers came out Sunday and posted the 10th-best defensive field goal percentage game in school history. Three players scored in double-figures as Clemson topped Wofford, 72-50, and Audra Smith earned her first victory as Clemson’s head coach. Next up is Cal State Northridge in Littlejohn Coliseum on Sunday at 1:00 pm.

Cross Country (@CUTrackandField)The men and women return to action this Friday to take part in the NCAA Southeast Regionals at Panorama Farms in Earlysville, Va.

Football (@ClemsonFB)Record: 8-1, 6-1 ACCClemson did not play last week, but moved from seventh to sixth in the USA Today coaches’ poll. Clemson dropped one spot from seventh to eighth in the BCS poll. The Tigers now have a streak of 12 straight weeks in the top 10 of the AP poll, the longest streak in school history. It is the 20th straight poll Clemson has been in the BCS rankings, also a school record.

Men’s Soccer (@ClemsonMensSoc)Record: 10-6-2, 5-4-2 ACCDespite a tough 1-0 setback to Duke on Friday to close the regular season, the men’s soccer team earned the No. 4 seed in the Atlantic Coast Conference tournament and hosts North Carolina Tuesday night at 7 p.m. at Historic Riggs Field.

Tickets are $8 for adults, $5 for children and FREE for students with a valid ID.

Women’s Soccer (@ClemsonWSoccer)Final Record: 7-8-4, 4-7-2 ACCTwo Clemson women’s soccer players – senior midfielder Vanessa Laxgang and junior goalkeeper Kailen Sheridan – were named to the 2013 All-Atlantic Coast Conference Women’s Soccer Third Team last week. In addition, Sheridan was named to the ACC All-Freshman Team. It was the first time since 2007 the program has had at least one player named to the All-ACC team, and the first time since 2011 it has had an all-freshman team selection.

Volleyball (@ClemsonVB)Record: 12-13, 6-8 ACCThe volleyball team dropped a pair of tough decisions in North Carolina last week to NC State and North Carolina. The Tigers had an opportunity to take No. 19 UNC to five sets with a big comeback in the fourth set on Friday, but were unable to hold on, despite a career-high 16 kills from freshman Leah Perri, last week’s ACC Freshman of the Week. The Tigers travel to Georgia Tech on Thursday and Wake Forest on Sunday.