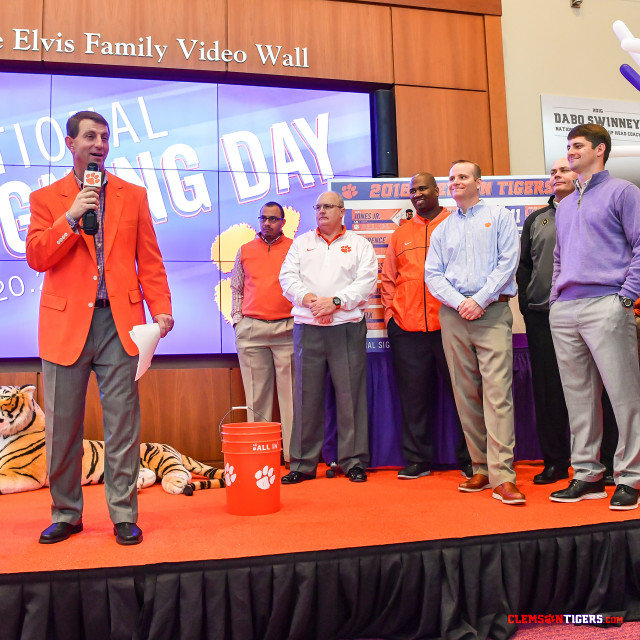 Thad Turnipseed calls it “The Machine.” Dabo Swinney refers to it as “Clemson Google.”

No matter the moniker, one thing is certain for Clemson football’s recruiting department…it’s working.

Four straight top-12 recruiting classes, including the highest-rated class in Swinney’s tenure with the most-recent 2018 group of signees, illustrates how a group of staffers who keep “The Machine” working every day have transformed the way Clemson football competes on the recruiting trail.

Envisioned and initiated by Swinney to help Clemson become more modern and leading-edge, the recruiting department is exactly that, with Swinney’s famous “best is the standard” mantra very much applying to a support area that’s now the envy of college football.

Just five short years ago, current co-offensive coordinator and then wide receivers coach Jeff Scott was the man on staff tabbed with coordinating recruiting operations. That was, of course, in addition to his duties coaching the likes of DeAndre Hopkins and Sammy Watkins. With travel logistics, mailers to prospects, on-campus official visits and the advent of social media, it was more than obvious that greater resources were needed to keep up, much less get ahead.

Enter Turnipseed, a former teammate of Swinney’s at Alabama who parlayed his own construction business into an associate athletic director role with the Crimson Tide, where he oversaw capital construction projects and handled external affairs for head coach Nick Saban. The 45-year-old was seemingly happy in his role, but a call from Swinney convinced him that he “needed a new challenge.”

“I’ll never forget when I visited Clemson and walked up to the front door of the WestZone not sure where to go,” said Turnipseed. “(Former running back) Roderick McDowell, who had never met me and didn’t know me at all, walked up to me and asked me how he could help and then walked me up to coach Swinney’s office and stayed and talked to me until coach arrived. I thought to myself, ‘Well, that’s not something you normally see.’ Clemson just had a totally different atmosphere, and I knew it was the right place for me and my family.”

The Alabama native left his home state and joined Swinney’s program with a single, inspiring challenge from the head man.

Turnipseed immediately went to work to answer Swinney’s mandate. Initially tasked with building out the recruiting department, he renovated the WestZone offices to create a new work room and war room and started adding student staff to get additional support in the day-to-day operations work, like mailing information to prospects and assisting coaches with organizational tasks.

“Jeff Scott had done so much, and I just came in and did the last 10 percent,” said Turnipseed. “Nothing would have started without the vision of coach Swinney and the support and leadership from (director of athletics) Dan Radakovich and president Jim Clements. Through all aspects of what we do, it always comes down to fit…are they a ‘Clemson guy’ who fits the culture that coach Swinney has built? That drives everything.”

At the same time that Turnipseed was getting up to full steam, Radakovich and associate athletic director Tim Match began their transformation of the sports information department, hiring Joe Galbraith to lead a renamed, restructured athletic communications group that took an approach similar to a marketing agency with a focus on digital content and social media.

That lined up perfectly with Turnipseed’s desires for his initial focus area, as social media had become an increasingly valuable tool in recruiting because of its opportunities for branding of a football program and direct communication with recruits who, like most teenagers in 2014, got their entertainment and communicated with friends on social media apps like Twitter, Facebook and Instagram.

Working in parallel towards the same goals as Turnipseed, Match and Galbraith hired new staff and readjusted roles of existing staff, all with the goal of providing greater recruiting tools for coaches by creating content that sold the values of the “Clemson experience” and brought campus life to the recruit, no matter where they lived, through social media posts.

To complement that development and further enhance what was happening inside the WestZone, Turnipseed then hired Jordan Sorrells in the fall of 2014 as the newly-created coordinator of recruiting communications. Sorrells was a quarterback at Furman who had been serving as his alma mater’s director of football operations. The same thing that appealed to Turnipseed – and most people who choose Clemson, for that matter – also appealed to Sorrells…the family atmosphere.

As Turnipseed turned his focus towards the construction of the Allen N. Reeves Football Complex, Sorrells quickly took over the daily management of recruiting, including the direct communication and social media monitoring of prospects, travel logistics for coaches and coordination of on-campus prospect visits. Over the next two-and-a-half years, he and Turnipseed also added Tyler Clements, Morgan Tadlock and Jeff Fellers as additional full-time staff who help keep “Clemson Google” running every day.

“It all begins with the big boards in the war room,” stated Sorrells. “As we go through the evaluation process, the most important thing is finding out who they are as people. We make sure they’re a fit from a character standpoint first, and then make sure they fit as a football player.

“From the boards, we then start communicating with them and traveling to see them to make sure we know everything about them before we offer them a chance to become a Tiger.”

With over 300 names of potential signees on the “big boards” inside the complex’s war room, Sorrells and staff stay plenty busy throughout the year making sure the coaching staff has all the tools necessary to bring the best and brightest to Clemson.

This year’s schedule came with a new wrinkle…an early signing period in which prospects who had made their decisions and were ready to end their recruiting process could sign their national letters of intent and avoid the extra months of scrutiny and unwanted calls and texts from competing coaches hoping they might “flip.”

The addition was met with great debate, as many coaches at Power Five Conference schools expressed frustration because of the awkward scheduling around bowl practice and other potential issues, but Swinney was the most vocal supporter.

“I actually wish it was even earlier,” explained Swinney. “It’s an opportunity for a kid who knows what he wants to do to actually be able to do it. We were the only sport without an early signing period. This cleans up a lot of the drama.”

Of course, Clemson still experienced some exciting signing-day dramatics on Dec. 20, as top offensive lineman Jackson Carman (Fairfield, Ohio) surprised the country by picking the Tigers over his home-state Ohio State Buckeyes and head coach Urban Meyer. When asked why he chose Clemson, the five-star tackle confidently replied, “Why not?”

It was a major coup for Swinney and his coaching staff that once again proved a reality to the rest of college football that some still surprisingly hadn’t yet realized…Clemson’s recruiting footprint now reaches all parts of the country, and the Tigers can, and will, get commitments from anyone, anywhere.

And Carman was not the only proof. Consider that the top player from five different states, South Carolina, North Carolina, Georgia, Florida and Ohio, chose to attend Clemson over countless other offers. And somehow even more impressive than that, consider that three of the top-five prospects in the ESPN 300 are coming to Tigertown. “Little ole’ Clemson,” as Swinney likes to say, is, in reality, a juggernaut on the recruiting trail.

But as important as talent is, it continues to take a back seat to character. Swinney has built his program on the development of his players as people, producing leaders in their communities who leave Clemson equipped with tools to be successful men, husbands and fathers. And prospects who hope to enroll at Clemson must demonstrate their readiness to positively contribute to the culture of Tiger football, a requirement for any young man fortunate enough to be added and kept on the recruiting board.

In that way, “The Machine” or “Clemson Google” nicknames probably don’t illustrate the personal touch that has helped Clemson football’s recruiting department elevate the program to new heights. But the “Caring, Hard-Working People Searching for High-Character Young Leaders Department” just doesn’t have the same ring to it.