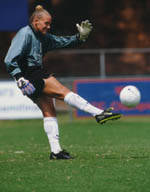 Clemson, SC – The tenth-ranked Clemson women’s soccer team will host Richmond this Sunday at 2:00 in the opening match of the 2001 season for both teams. Clemson is 3-1 all-time against Richmond. Last season, the Lady Tigers defeated the Spiders 1-0 in a match played on October 1 in Richmond, Virginia. In two exhibition games this season, Clemson has tied Auburn 1-1 and defeated Mercer 7-0.

The Lady Tigers are 6-1 all-time in season openers with the only loss coming to North Carolina in 1994, the Lady Tigers first year as a soccer program. In 2001, Clemson returns eight starters and 20 letterwinners from a team that won the ACC Regular Season Championship and advanced to the Final Eight of the NCAA Tournament last season. Head Coach Todd Bramble will be in his first season at the helm of the Lady Tiger program after spending five years as an assistant coach with the Clemson men’s soccer team and one year as the head coach at Butler.

Looking at Richmond–Richmond returns eight starters and 15 letterwinners from a team that finished 13-7 overall last season and 6-2 (third) in the Colonial Athletic Association Conference. The Spiders advanced to the second round of the NCAA Tournament where they lost 4-0 to number-two seeded Nebraska. Richmond is coached by Peter Albright who has a 59-40-4 record in five years with the Spiders and a 220-121-26 mark in 20 years of coaching.

Series with Richmond–Clemson is 3-1 all-time against Richmond. Last season, the Lady Tigers defeated Richmond 1-0 in a match played on October 1 in Richmond, Virginia.

Clemson in 2001 preseason rankings–Clemson is ranked 10th by Soccer America and 12th in the NSCAA poll. The Lady Tigers are ranked 11th by Soccertimes.com.

Clemson in 2000 national rankings–Clemson was ranked seventh by Soccer America and fifth by the NSCAA and soccertimes.com at the conclusion of the 2000 season. The Lady Tigers were also ranked fifth by SoccerBuzz.

Lady Tigers won ACC Regular Season Championship in 2000–Clemson and N.C. State tied 0-0 in Raleigh, NC on Sunday, October 22. With that tie, Clemson won the Atlantic Coast Conference regular season title with a 5-1-1 record in league play. It was the first time in school history that Clemson had won the regular season title.

Clemson’s Lindsay Browne named ACC Freshman of the Year in 2000–Current Clemson sophomore Lindsay Browne was named the 2000 ACC Freshman of the Year. Browne, a native of Encinitas, CA, led the Tigers in scoring with 13 goals and 12 assists for 38 points. She started all 23 games for the team and scored seven game-winning goals. Browne was selected to Soccer America’s Team of the Week on August 30 and was named ACC Player of the Week on September 25.