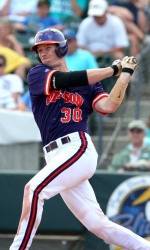 Reliever Ryan Strauss (7-0) earned the win, as he pitched 1.1 innings and allowed five hits and five runs. Buster Posey, the starting catcher, pitched the final 0.2 innings to record his fifth save of the year.

After three scoreless innings, the Tigers scored one run in the fourth inning. With two outs, Stan Widmann was hit by a pitch and J.D. Burgess then drove home a run with a single to left-center.

Clemson scored a run in the sixth when Wilson Boyd led off the frame with a solo home run to right-center. His eighth long ball of the year also extended his hitting streak to 10 games.

The Orange and White scored again in the seventh inning when Kyle Parker drew a one-out walk before scoring on Doug Hogan’s triple down the right-field line.

The Seminoles tied the score 3-3 in the eighth inning. Stuart Tapley was hit by a pitch to lead off the frame. Tyler Holt singled through the left side before Jason Stidham plated both runners with a double to left-center. Stidham moved to third on a single by Posey before scoring on a wild pitch.

Florida State took a 5-3 lead in the ninth inning. Tommy Oravetz led off with a single up the middle. Luke Smierciak came in as a pinch runner and moved to second on a sacrifice bunt by Mike McGee. Tapley then plated Smierciak with a one-out single to center. Tapley moved to second on a groundout before Stidham drove him in with a two-out single to center.

The Tigers evened the score 5-5 in the bottom of the ninth inning thanks to Hogan’s towering two-out, two-run homer to left on a 3-1 pitch. It was his 11th long ball of the season.

The Garnet and Gold rallied to take a 9-5 lead in the 10th inning after putting its leadoff batter on base for the fourth inning in a row. Jack Rye led off with a single to center before scoring on Dennis Guinn’s double to center. Tony Delmonico singled to center, scoring Guinn. Pinch-hitter Ohmed Danesh then put runners on the corners with a single to right. While Danesh was caught stealing second, Delmonico was able to score from third on the throw. Then with two outs, Tapley drew a walk and moved to third on Holt’s single to center. Stidham then reached on a dropped flyball by Sanders that allowed another run to score.

But for the second inning in a row, the Tigers refused to go down without a fight. In the bottom of the 10th inning, Mike Freeman and Jeff Schaus hit back-to-back singles with one out. Parker then pulled the Tigers closer with his 10th homer of the year, a three-run shot to right. Ben Paulsen followed with a double down the right-field line. Two batters later, Boyd drew a two-out walk. But Widmann hit a liner right at Tapley at third to end the game.

The Seminoles totaled 15 hits and were led by Stidham’s two hits and three RBIs. Rye added a game-high three hits.

Every Clemson starter had at lease one hit, as the Tigers tallied 12 in all. Hogan had two hits, including a triple and homer, and three RBIs. Parker added a three-run homer and four of Clemson’s nine walks. The Tigers’ downfall was leaving 14 runners on base to the Seminoles’ eight. The Tigers also left at least one baserunner on base in all 10 innings.

Clemson will host Florida State in game-two of the three-game series on Sunday at 7:00 PM.