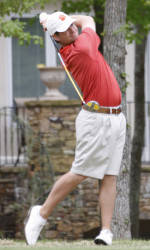 CLEMSON, SC – Ten former Clemson golfers, including three who won the ACC Championship when they were in college, will participate in the BMW Charity Pro Am on the PGA’s Nationwide Tour this coming weekend. The event will be held May 17-20 and will be played on three courses, Thornblade Country Club in Greenville, Greenville Country Club’s Chanticleer course and Carolina Country Club in Spartanburg.

Former Tigers in the field include Brent Delahoussaye, Frank Wrenn IV, Brian Duncan, Elliott Gealy, Matt Hendrix, Kevin Johnson, Ben Martin, David May, Sam Saunders and Charles Warren. This will be the most former Tigers in a PGA Tour event in history.

Johnson (1988), Warren (1997 and 1998) and May (2009), were all ACC individual champions during their respective Clemson careers. Duncan, Hendrix, Johnson, Martin and Warren were all All-Americans at one point. Warren is one of two Clemson golfers in the school’s Ring of Honor.

Hendrix, Johnson, Martin and Warren are all regulars on the Nationwide Tour this year. May is coming off a 13th place finish at the event in Athens, GA two weeks ago.