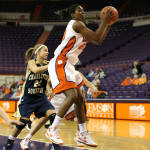 Clemson, which matched its win total from last season with the victory, took advantage of a size advantage in the post to score 56 points in the paint and out-rebound the Buccaneers by 15. Tate, a 6’1″ sophomore forward, led the Lady Tigers with career highs of 17 points and 10 rebounds, while playing just 16 minutes.

“I just came out and played hard,” said Tate. “I was going to the boards to help us get some easy baskets in transition.”

Hardy tied her personal best with 15 boards. The junior from Spartanburg, SC also tallied 14 points and handed out eight assists with three steals. Post Whitney Hood was also 5-for-5 from the field for 11 points while Sthefany Thomas added nine points apiece in the win.

Kelsey Wasmer hit a pair of three-pointers to open the second half for Charleston Southern, as the Buccaneers cut the deficit back to 10 within the first five minutes of the period. Clemson then scored the next 13 points and the lead fell below 20 just twice the rest of the way.

“During halftime we talked about not easing up and we wanted top lay hard the entire 40 minutes,” said Lady Tiger Head Coach Cristy McKinney. “We were able to get a lot of run-outs. We have been working on that in practice and definitely wanted to get better with that today.”

Clemson scored 20 of its 85 points in transition which helped the Lady Tigers shoot 52.4 percent (33-63) from the field and make up for just a 1-for-8 night from long range.

“We came out with a lot of energy today and played as a team,” Hardy added.

Charleston Southern (7-10) knocked down seven three-pointers, including four by Wasmer and three by leading scorer Pam Tolbert. Tolbert finished with 25 points, four steals and three assists in the effort.

Clemson will return to conference play on Friday night as the Lady Tigers travel to Boston College. The game is scheduled to begin at 7:00 pm in Chestnut Hill, MA.