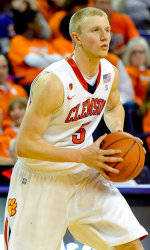 CLEMSON, SC – Clemson junior Tanner Smith has been named to the Capital One Academic All-District III Team for the second straight year, as announced Thursday by the College Sports Information Directors of America (CoSIDA). Smith was one of five first-team selections from District III, which covers Division I universities from Florida, Georgia, North Carolina, South Carolina and Virginia. He was joined on the Capital One Academic All-District Team by Trian Iliadis of Old Dominion, Brad Loesing of Wofford, Drew Spradlin of Elon, and Tyler Zeller of North Carolina.

Smith, a two-time All-ACC Academic Team selection, has started 18 of the 20 games he has played in this season. He was Clemson’s regular starter at a guard position before a sprained knee suffered in the first half of the game at North Carolina on Jan. 18. For the season, Smith is averaging 8.1 points and 3.6 rebounds per game. He leads the team in charges taken (14) and free throw percentage (.768), and is third in assists (53).