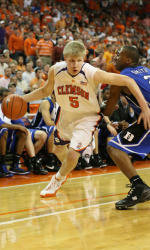 Greensboro, NC – Freshman guard Tanner Smith was named to the All-ACC Academic men’s basketball team Friday, as announced by league Commissioner John Swofford. Smith is one of eight players honored, and one of three freshmen on the team. Clemson has had at least one player on the Academic All-ACC team every year since the 2002-03 season.

To be eligible for consideration, a student-athlete must have earned a 3.0 grade point average for the previous semester and maintained a 3.0 cumulative average during his academic career. Other selections to the team include Miami guard Jack McClinton and Duke senior Greg Paulus.

Smith, a pre-business major from Alpharetta, GA, has played in all 29 games this season and is averaging 12.9 minutes of playing time per contest. He holds averages of 3.6 points and 1.9 rebounds per game and ranks fifth on the team with 27 steals.