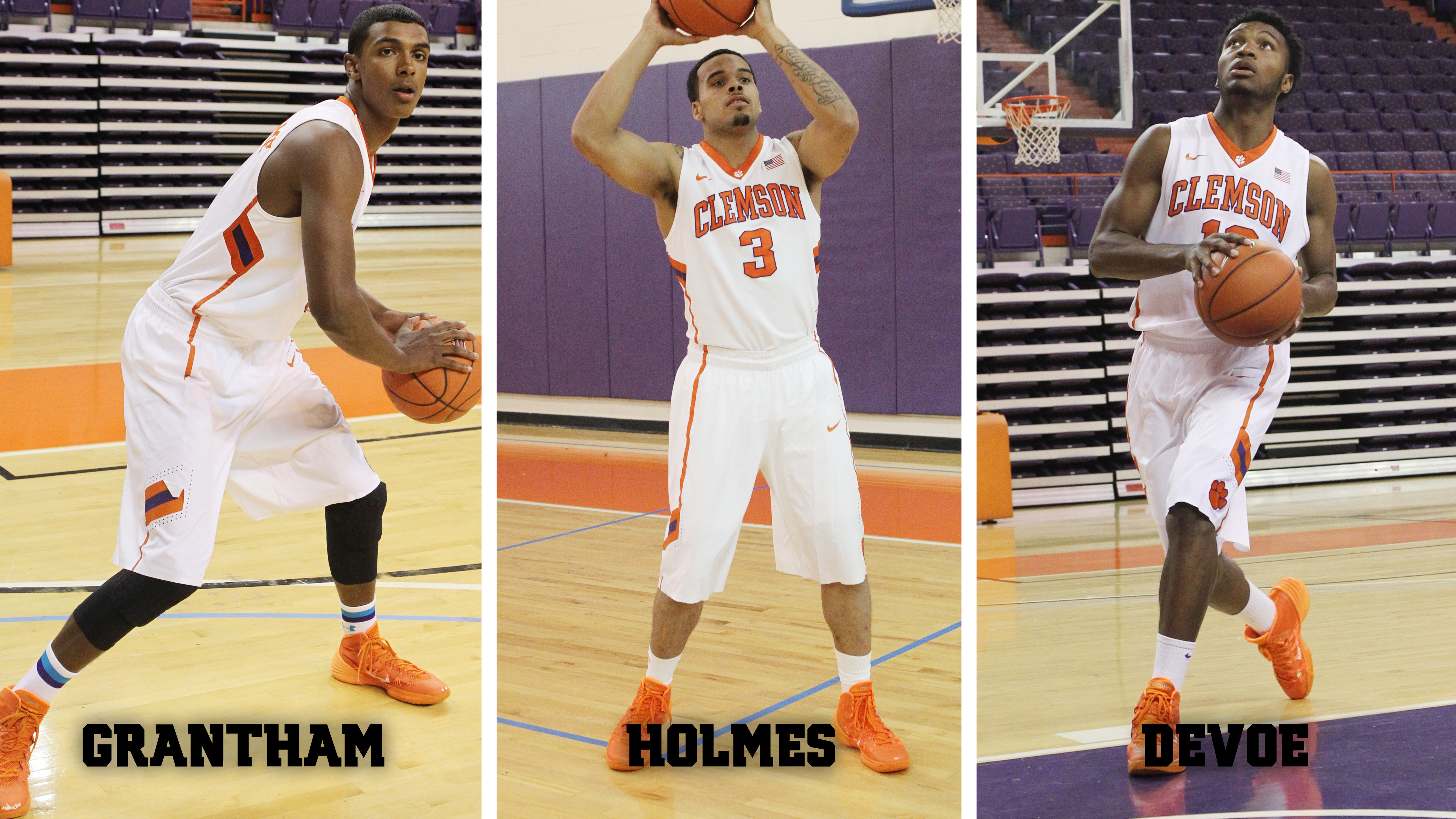 With the calendar turning to July and the news still fresh that K.J. McDaniels was selected 32nd overall by Philadelphia last Thursday in the NBA Draft, Clemson’s staff quickly diverted its attention to the newest group of promising young players striving to make the same type of impact that McDaniels did for Tiger basketball.

The second session of summer classes is now underway, and last week Brad Brownell and staff welcomed the final two pieces of the Tigers’ 2014-15 roster to campus, Gabe DeVoe and Avry Holmes. They join 6-8 wing Donte Grantham, who enrolled in the first summer session, to complete what is arguably Brownell’s best signing class to date.

While the three players have similar skill sets coveted by Brownell, each arrived in Tigertown under different recruiting circumstances.

Clemson went the distance to land Grantham, a top-100 recruit according to Rivals and Scout. Originally a class of 2013 prospect, he reclassified and attended Hargrave Military Academy this past season. Once thought to be the leader for his services, the Tigers were suddenly fending off the likes of Michigan – the 2013 NCAA Tournament runner-up. In the end, Clemson ended up winning the recruiting battle against the Wolverines.

Grantham is skilled as a shooter, but has quickly added six pounds to his slender frame to bulk up for the rigors of play in the Atlantic Coast Conference. For him, the decision to sign with Clemson came down to fit.

“I felt very comfortable here with the Clemson family,” Grantham said. “K.J. really helped me with my official visit, and it felt like the right fit with the players and coaches.”

Grantham was the West Virginia Player of the Year after leading his hometown Martinsburg High School to the AAA state title in 2013. This past season, he averaged 24.3 points per game and shot 43 percent from three-point distance for Hargrave.

“Donte is highly regarded because of his versatility, vision and ability to shoot the basketball,” Brownell said. “We want highly motivated winners in our program, and Donte is certainly that.”

DeVoe scored the ball at an even higher rate this past season. He led the state of North Carolina by averaging 34.0 points per game for Shelby High School. He was the Associated Press Player of the Year in the state, but landed greater praise at season’s end. He was named a Parade All-American, only the fifth such prospect to sign with Clemson.

In addition to his scoring prowess, DeVoe has been noted for his leadership as a player.

“Gabe is a strong combo guard who sees the floor very well and has deep range as a shooter,” Brownell said. “He’s also an outstanding student and leader. I have no doubt he will one day become a captain of the basketball program.”

“Over the last part of my AAU season, the (Clemson) coaches recruited me the hardest,” DeVoe said. “I saw Coach Brownell at a lot of my games. It’s a dream to play in the ACC, plus it’s not far from home.”

While that may be the case for DeVoe, it’s certainly not close to home for the program’s newest addition, Holmes. After two successful seasons at the University of San Francisco, the Oregon native signed an aid agreement with the Tigers after informing his coaches of his desire to transfer.

Holmes was an honorable mention All-West Coast Conference selection this past season, when he averaged 12.5 points per game and shot 41.9 percent from three. In two seasons with the Dons, he made 98-223 shots behind the arc (43.9 percent).

“Avry is a skilled shooter and good decision-maker who comes to us after two productive years of play in a very good league,” Brownell said.

Holmes will sit out the 2014-15 season per NCAA transfer rules, but expects to learn the ropes by competing against incumbent starting point guard Rod Hall every day in practice.

“Rod’s in his fourth year, and he knows how to lead a team in the ACC,” Holmes said. “I haven’t been in the situation, but I’ll be watching and learning from him.”

Though Clemson returns four starters from a team that went 23-13 and advanced to the semifinals of the NIT, pundits are likely to point to the absence of McDaniels’ 17.1 points, 7.1 rebounds and 2.8 blocks per game as reasons for a decline in 2014-15.

The Tigers’ three newest players insist there won’t be any talk like that amongst the team, however.

“People may say that we’ll have a down year, but we are close as a team and as newcomers we’ve already connected well,” Grantham said. “We’re going to be really good.”