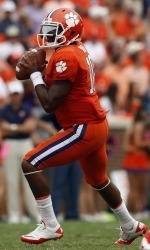 The Manning Award, sponsored by the Allstate Sugar Bowl, has named eight quarterbacks as its “Stars of the Week.” College football fans can now go to the Allstate Sugar Bowl Facebook page to vote for what they think was the best performance from this past weekend. When voting closes on Thursday at 9 a.m. (Central), the top vote-getter will be announced as the Manning Award Player of the Week.

Seth Doege, Texas Tech(40-of-44, 401 yards, 5 TDs, 0 INT) Doege completes his first 15 passes and sets an FBS record for completion percentage as he leads the Red Raiders to a 59-13 blowout of New Mexico.

Sean Renfree, Duke(40-of-52, 359 yards, 2 TDs, 1 INT) Renfree ties a school record with 40 completions as he rallies the Blue Devils from a 12-point deficit in their ACC opener against Boston College.

James Vandenberg, Iowa(31-of-48, 399 yards, 3 TDs, 1 INT) Down 24-3 late in the third quarter, Vandenberg runs for a touchdown then throws for three fourth-quarter throws as the Hawkeyes stun Pitt, 31-27, with the biggest comeback in school history.

Russell Wilson, Wisconsin(23-of-32, 347 yards, 3 TDs, 1 INT) Wilson leads the potent Wisconsin offense to 621 yards of total offense, including scores on six of its first seven possessions, in a 49-7 win over Northern Illinois.

Steele Jantz, a junior quarterback from Iowa State University, was last week’s Manning Award Player of the Week. The product of Agoura Hills, Calif., who was also the Big 12 Offensive Player of the Week, led the Cyclones to an overtime upset of cross-state rival Iowa, 44-41. The junior directed four consecutive touchdown drives, including three in overtime to clinch the dramatic victory over the Hawkeyes. Included in those drives were four critical third-down conversions, including a third-and-15 and a third-and-20, as well as a fourth-and-one conversion which led to the game-tying TD pass to Darius Darks with 1:17 to go in regulation. He finished the game completing 25-of-37 passes for 279 and four touchdowns with no interceptions. The 6-3, 224-pounder also rushed for 42 yards as the Cyclones scored their most points against Iowa since the teams met for the first time in 1894.