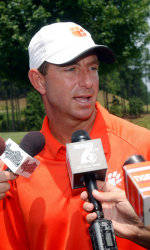 Swinney Hopes Knowledge Will Pay Off in 2011

SUNSET, SC – In his first two seasons as head coach at Clemson, Dabo Swinney has learned a lot of things. None, however, is more important than what he told the media on Tuesday at his annual golf outing at The Reserve at Lake Keowee in Sunset, SC.

“I learned it is a lot more fun to win at Clemson than to lose. I can tell you that.” he said.

In his first full season as the Tiger head coach, Swinney learned how to win when he became the first coach to guide Clemson to the ACC Championship game. That season he had guys like Thomas Austin, Michael Palmer, Ricky Sapp and Kavell Connor to lead a team that rallied from a 2-3 start to six straight victories and an Atlantic Division Championship.

That senior group concluded Swinney’s first season with a victory over Kentucky in the Music City Bowl.

Thanks to the success of 2009, expectations were high at Clemson this time a year ago. But a down year in Tigertown forced Swinney to revaluate what he was doing, especially on the offensive side of the ball.

“I think our guys know that it is a fine line. It isn’t very far from being up and down.”

“I’m all about the long term,” the Clemson coach said. “I’m all about building something here and building a program that will sustain by not cutting corners and not sacrificing and doing things the wrong way.

“We are not just doing something to help us get (wins) in the short term. I want to be here a long time. I’m really excited about the things we have in place now. It has been a long process. It has been a grinding two years to get to this point. But, our football team has learned how to compete. We are a tougher team than we were in January of ’09. We still have improvements to make, but we have come a long way.”

The proof of that will start on September 3 when the Tigers host Troy at 3:30 p.m.

“We have the right things in place. There is no doubt.”

Swinney hopes to start cashing in that payoff when fall camp begins on August 5.