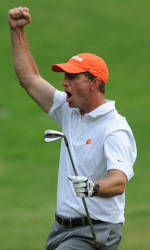 GREENVILLE, SC – Clemson Head Football Coach Dabo Swinney and former Clemson All-ACC golfer Phillip Mollica fired a best ball score of 58 on Saturday and made the cut for the final round of the Nationwide Tour’s Pro Am of the BMW Charity Pro Am presented by Synnex Corporation. The third round score of 13 under par 58 gives Swinney and Mollica a 29-under par score of 186, tied for ninth in the field of 168 teams. Swinney and Mollica played the third round at Thornblade Country Club in Greenville and that will be the site of the final round on Sunday.

The 13-under par score of 58 was the best in the field on Saturday. Mollica fired a four under par 67 to make the cut in the regular tour event. It was his first made cut on the Nationwide Tour event for Mollica, who graduated from Clemson just last year.

It was the second year that Swinney has played in the BMW Charity Pro Am on the Nationwide Tour. A double digit handicapper, Swinney only plays the game between late April and the end of July. “Our goal was to make the cut and I am excited that we did it,” said Swinney, who coached Clemson to the Atlantic Division title of the ACC this past fall. “I am a competitive person and we wanted to improve on last year and make the cut.

“Phillip is a terrific young player and it has been great to play with him this week. He shot a 67 today and I am so happy that he made the cut individually for the final round as well.”

Swinney made many contributions in the round. On the 12th hole he chipped in from 20 yards off the green for a natural birdie that was a net eagle for his team score. The chip was racing towards the hole faster than a C.J. Spiller kickoff return, but it hit the flag stick square and stuck in the hole. “That was just your basic birdie,” said Swinney with a smile. “I drove the ball in woods on the right, then hit a six-iron through a tree. That was a miracle in itself. Then the chip went in. It was quite a hole.”

Swinney also made a 35-foot putt for a par on the par five 16th hole, a putt that was shown live on the Golf Channel. The putt was made at the green adjacent to the home of former Clemson Hall of Fame football player Dick Hendley, the grandfather of US Open Champion Lucas Glover.

Swinney and Mollica both made pars on the par three 17th hole and Mollica made a par and Swinney a net birdie on the 18th hole to make the cut by an extra shot.

Mollica is one of three former Tigers who made the cut for the regular Nationwide Tour event. Former Tiger Tommy Biershenk had the round of the day with a course record 62, 10 under par, at Carolina Country Club and stands in 17th place at 204. He had two eagles in his round on Saturday.

Kyle Stanley, an All-American on Clemson’s 2009 team, had a 69 at Bright’s Creek Country Club on Saturday and is in 26th place at 206. He also had an eagle on Saturday on the 18th hole. Mollica is in 59th position entering the final round at 209. The individual leader is Fabian Gomez at 18 under par 197.