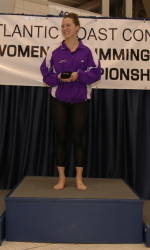 Swimming and Diving Travels to Maryland for ACC Championships

The 2009 ACC Swimming and Diving Championships kick off on Wednesday evening at the Eppley Recreation Center in College Park, MD. The women’s swimming portion gets underway at 6:00 p.m. with the 200 medley relay and the 800 freestyle relay, while the diving will start on Thursday.

The women’s team will compete in the championship-format meet from Wednesday to Saturday, with preliminaries taking place in the mornings, and the finals starting at 7:00 p.m. For the second consecutive season, the finals will be broadcast live on ACC Select each day. The ACC has set up a Championship site with all pertinent information regarding scheduling, ACC Select, results, and visitation information.

The ACC Championship meet is set up to cover two weekends. The first is dedicated to women’s swimming, as well as men’s and women’s diving. The men’s swimming championships will be held the following week, from Feb. 25-28 at the same facility. The men’s diving scores form the first weekend will be tallied and scored as part of the men’s team total scores.

The women’s swimming portion gets underway with the 200 medley relay and the 800 free relay. The Tigers’ group of Kelli Kyle, Katrina Obas, Rachel Regone set the pool record earlier this season in the event and currently hold the third-best time in the conference. The 800 free relay group of Michelle Parkhurst, Cassy LaRussa, Rachel Hesler, and Summer O’Donnell have put in the fourth best time in the ACC this season.

Last season, senior Michelle Parkhurst set the ACC record for the 200 freestyle (1:44.74) on her leadoff leg of the 800 free relay. She went on to win three individual events, as well as a relay championship, earning her the nod as ACC Swimmer of the Meet. The Tigers went on to finish fith for the second consecutive season.

ClemsonTigers.com will have continued coverage of the ACC Championships, with updates after each preliminary and finals session, and results posted as soon as they become available. A LiveStats link will be added when competition begins as well.