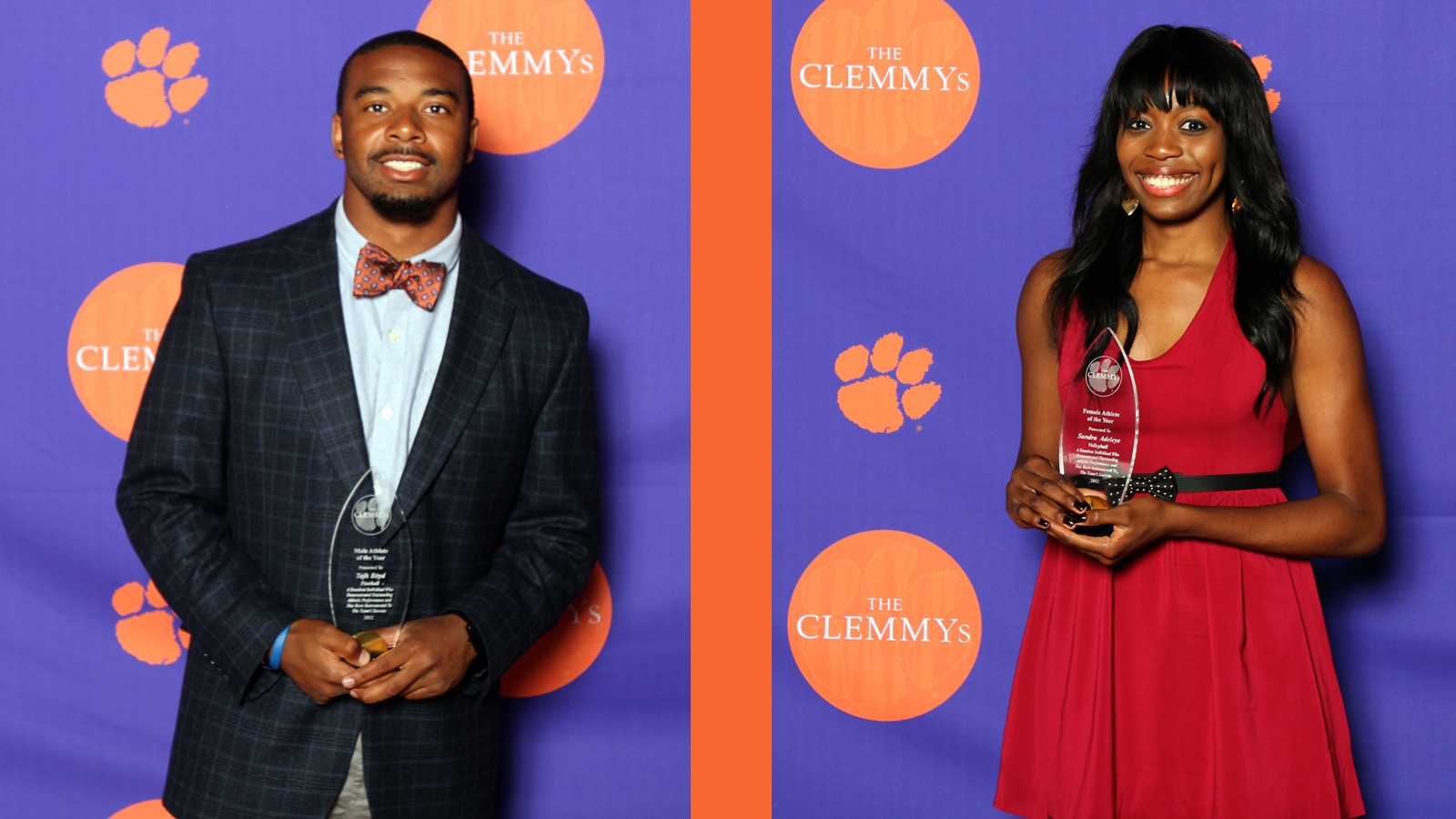 CLEMSON, SC – At most major award shows, the stars walk the red carpet and proceed into a ballroom where awards are handed out for the year’s best performances. That was also the case at the inaugural CLEMMYs Monday, only the stars were Clemson’s student-athletes, the carpet was orange and the ballroom was Littlejohn Coliseum.

The CLEMMYs were modeled after the ESPYs as a comprehensive year-end awards show encompassing athletic and academic achievement. They replaced the Athletic Department’s annual honor banquet, which was an academic-focused event where only student-athletes with at least a 3.0 GPA had been invited.

“It’s all about the student-athletes. This is a night for them to have fun and just get together and celebrate,” Assistant Director for Athletic Academic Services Lindsey Ricketts said.

Boyd garnered Atlantic Coast Conference Player of the Year honors in 2012 as he led the football team to its first 11-win season in 31 years, while Adeleye became the first four-time All-ACC selection in the volleyball program’s history.

“I didn’t know what to expect, but it was a really nice event,” Boyd said afterward. “I felt like (Director of Athletics) Dan Radakovich did a great job with this, setting it all up and bringing all the teams together. At the end of the day, we don’t get that many chances to see everybody, and I don’t think we all know who each other are as people. It was great just to meet everybody, see everybody and for all the athletes to be in the same place together.”

The event, which was emceed by JDew, began with the Athletic Director’s Academic Excellence Award, presented to graduating senior student-athletes who have been on the honor roll for seven consecutive semesters. The winners were Ty McCormack from men’s cross-country and track & field, Heather Marik from women’s soccer, David Fulmer from football, Natalie Patzin from volleyball and Yannick Maden from men’s tennis.

The All-Academic Team, comprised of the student-athletes from each team with the highest overall GPA who have earned 60 hours or more at Clemson, was up next. Those student-athletes were Kelly Gramlich from women’s basketball, Carson Fields from men’s basketball, Maden from men’s tennis, Clay Bates from baseball, Alex Stockinger from men’s soccer, McCormack from men’s cross-county and track & field, Natalie Anthony from women’s cross-country and track & field, Mary Ann Sims from rowing, Andrew Maass from football, Thomas Bradshaw from men’s golf, Yana Koroleva from women’s tennis, Patzin from volleyball and Emily Howard from diving.

The Michelin Career Center Awareness Award winners were Cory Thalheimer of men’s track & field and Marik, and the Determined Spirit Award went to Mike Kent of the baseball team.

The Cecil Huey Award, presented to the student-athlete that plans to go to graduate school and always goes the extra mile in their sport and in the classroom, went to McCormack.

The Record Breaking Performance Award went to the women’s track and field team for its fourth-place finish at the NCAA Championships, and the Bill D’Andrea Service Award for service, leadership and academic commitment went to volleyball’s Alexa Rand.

Next up were the awards for the highest team GPAs for the 2012 academic year.

The Competition of the Year award – for a striking performance by a team that led to an outstanding victory – went to the football team for its 25-24 win over No. 7 LSU in the Chick-fil-A Bowl, and it was accepted by place-kicker Chandler Catanzaro and linebacker Quandon Christian.

The winners of the ACC Top Six Award for Community Service were Rand, Thalheimer, Brittany Waller from women’s track & field, Emily Howard from diving and Kelsey Igo and Heather Cummings from rowing.

Academic Hall-of-Fame Awards went to Rand and Patzin from the volleyball team and Rashard Hall from football, and Academic Achievement awards were given to Quinyotta Pettaway of the women’s basketball team, Marcus Maxey from men’s track & field and Joseph Moorefield from baseball.

The next award handed out was for Best Moment, which went to Jon McGibbon of the baseball

Radakovich then presented the final awards of the night, the Solid Orange Male and Solid Orange Female, to Tanner Smith of men’s basketball and Rand, respectively, for personifying what it means to be a student-athlete through the leadership, athletic performance, service, academics and sportsmanship.

“I thought it was awesome,” Rand said of the event. “It’s really nice of them to put this together for us, and I’m glad I could be a part of the first one my senior year.”

Coaches nominated student-athletes and support staff for the athletic awards based on their accomplishments during the Spring 2012 and Fall 2012 seasons. Those submissions were then reviewed by a nomination committee, and selections were determined. Academic awards were nominated by Vickery Hall advisors and winners chosen by the overall staff.

All told, 17 awards were handed out on the evening, and all 431 student-athletes on campus were expected in attendance – including graduating senior support staff members – making the night truly one to remember for Clemson Athletics.

“It was really fun,” Rand said. “We don’t get to do it that often, and for everyone to dress up together and get to hang out one last time before summer was a lot of fun.”