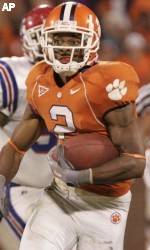 Clemson, SC-Clemson first-team All-ACC receiver Chansi Stuckey suffered a broken foot in practice Tuesday and will be lost for three-five weeks. Stuckey suffered the injury in a non-contact drill in practice while making a cut. He will have surgery on the foot Wednesday afternoon.

“I thought we were finished with these injuries,” said Clemson Head Coach Tommy Bowden, who has already lost preseason All-American linebacker Anthony Waters for the season due to a torn ACL. Starting linebacker Tramaine Billie has not played this year and his status for the remainder of the season is unknown after he suffered a foot injury in preseason practice.

Stuckey suffered the same injury as starting safety Michael Hamlin, who broke a foot during the Boston College game on September 9. Hamlin is expected to return to action, at least on a limited basis, this Saturday at Wake Forest.

“Chansi was having a terrific season,” said Bowden “He is such a talented player on the field, he has had so many momentum changing plays this year. But, he is also one of our team leaders. It is a very big loss for our team.”

Stuckey was tied for the ACC lead in receptions this year with Georgia Tech’s Calvin Johnson with 5.0 per game. He had 25 receptions for 331 yards and three of Clemson’s eight touchdown passes this season.

For his career, Stuckey is 10th in school history in total receptions with 116 and is 14th in receiving yards with 1391. He was a first-team All-ACC receiver last year when he led the ACC in interceptions with 64. He was named to the preseason list of the Belitnikoff Award for 2006.

Bowden said that other players would have to step up, including freshman wide receiver Jacoby Ford, who has scored two touchdowns on kick returns this year, but has just one reception.

“You don’t plan on these things, but injuries are part of the game,” said Stuckey. “I plan to be back at practice and help the receivers and this team do whatever it can do to win at Wake Forest and any other games until I can come back.”