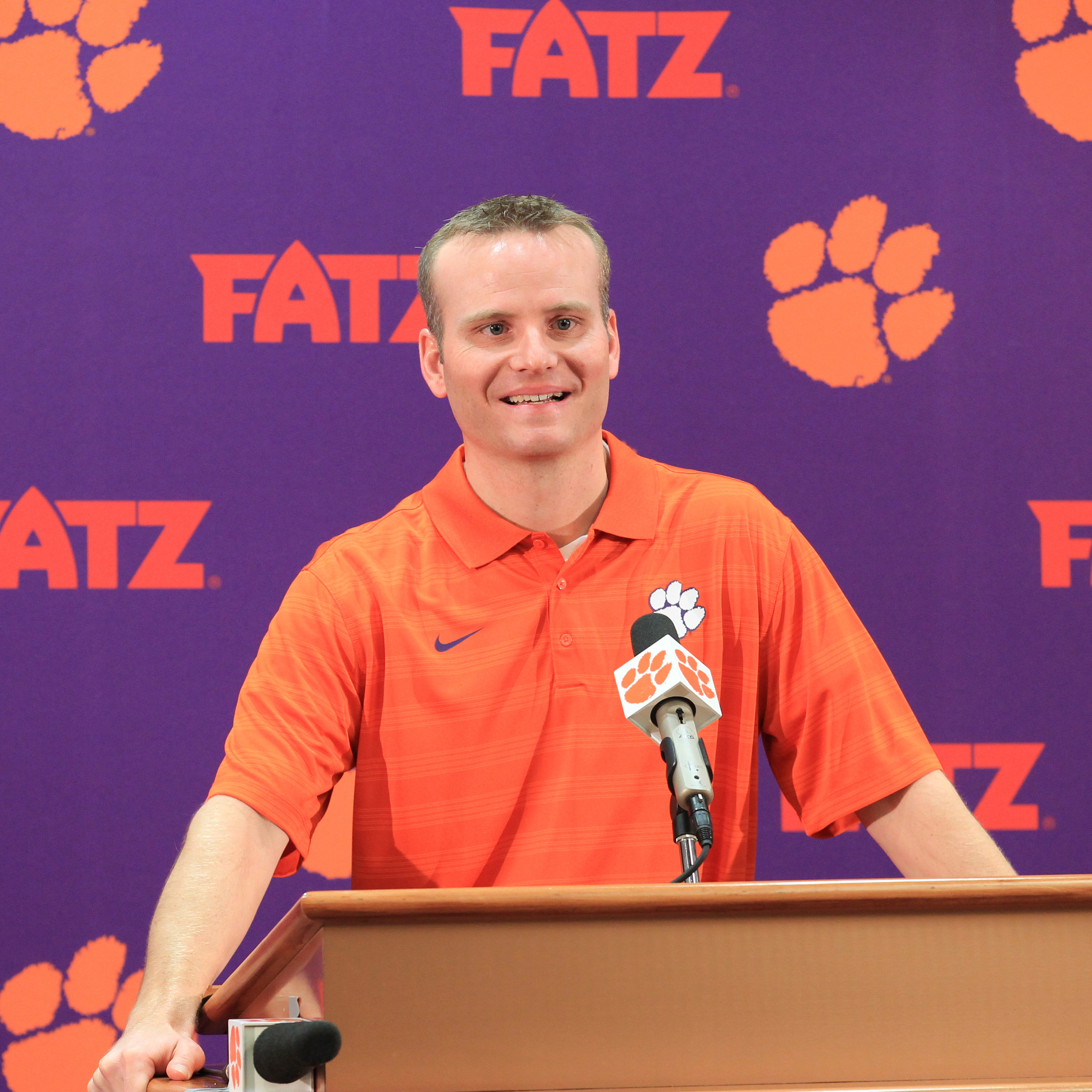 Note: The following appears in the February edition of Orange The Experience, which should arrive in mailboxes this week. Read about Brandon Streeter’s return to Tigertown, to coach the same position he played for the Tigers in the 1990s.

Head Football Coach Barry Streeter had recently finished his 37th season at Gettysburg College and was back on the road recruiting on an early Monday morning in December. He was somewhere in New Jersey when his son Brandon called his cell phone.

“So dad, what are you doing on December 29th,” Brandon asked.

“I had talked with Brandon about the opening at Clemson with Chad Morris going to SMU, but I didn’t put it all together,” Barry said. “I told him I would probably be in a car driving back to Pennsylvania from Christmas vacation in Tennessee, where we had planned to gather as a family at my other son’s house.

“Then Brandon said, ‘How would you like to go to the Russell Athletic Bowl and watch me coach Clemson’s quarterbacks?’ I had to pull over to the side of the road. I started to cry because I knew how much Brandon loved Clemson and wanted to someday return to be a coach.”

It has been a whirlwind couple of months for Brandon Streeter. He started the football season as the offensive coordinator and quarterbacks coach at the University of Richmond, where he helped that program to the second round of the FCS playoffs with an offense that ranked in the top 15 in the nation in a number of categories.

When Chad Morris was named the head coach at SMU on December 1, it did not take Dabo Swinney long to call Streeter to gauge his interest in returning to Clemson.

“I was very impressed with Brandon when he worked for us as a graduate assistant (2004-05), and I followed him closely over the last nine years knowing that one day I would like to hire him,” Swinney said. “He is a Clemson man who I know is going to represent us well. And I was always impressed by what his offenses accomplished.”

Streeter has a long history with the Clemson program, and it makes him a natural for the position of not only quarterbacks coach, but also recruiting coordinator. He spent five seasons at Clemson as a player, first as a backup to four-year starter Nealon Greene, then as the starter in 1998 and 1999.

He played in just eight games due to injury as a senior in 1999, helping Tommy Bowden’s first team to a Peach Bowl bid. He threw for 1,466 yards that season, the same total Deshaun Watson had in the same number of games in 2014. Now, he will coach the young celebrated signal-caller.

One of his standout performances took place in a win over No. 19 Virginia in 1999. In Bowden’s first ACC game, Streeter completed 24-of-32 passes for 343 yards, then a school single-game record. He led the Tigers to 33 points in the first 32 minutes of the game by completing seven different passes of 20 yards or more. The Monday following the game, USA Today named him the National Player of the Week.

When he graduated, Streeter had broken or tied 11 Clemson records during his career, throwing for 3,506 yards and 17 touchdowns. He is still eighth in Clemson history in completion percentage, ninth in completions, 11th in passing yardage and 13th in touchdown passes.

A three-time member of the ACC Academic Honor Roll, he became Clemson’s inaugural winner of the Brandon Streeter Award in 1999, which is annually given in his honor to a student-athlete in any sport who has succeeded athletically despite a physical injury. Streeter overcame a shoulder and hip injury that year and a broken ankle in 1997.

After starting his career at Charleston Southern as a full-time coach, he returned to Clemson as a graduate assistant in 2004 and 2005, primarily working with veteran signal-caller Charlie Whitehurst, who is still in the NFL with the Tennessee Titans.

He obtained a master’s degree from Clemson, and then gained coordinator experience at Liberty and Richmond. Six of the last seven teams with whom he worked finished the season in the top 25 of the FCS poll. Five of the last eight teams were conference champions or co-champions.

Richmond finished with a 9-5 record and a bid to the FCS playoffs in 2014 thanks to a passing offense that averaged 314 yards per game, eighth best in the nation. The Spiders averaged 461 yards per game of total offense and ranked second in third-down conversions (.516) and third in first downs (332).

Richmond was seventh in the nation in passing yards in 2013 with 328.3 yards per game and 24th in total offense with 441 yards per game. Virtually every Richmond individual game, season and career school passing record was established during that 2013 season.

“It has been good to get away and now come back,” said Streeter, who earned his undergraduate degree from Clemson in health science. “I have been able to see how other programs work and earned significant experience as a coordinator.”

He also takes recruiting coordinator duties over from Jeff Scott, which should be a natural fit for Streeter.

“I went to Clemson, I know Clemson and I think that has prepared me to be in charge of recruiting because I know what the place is all about,” he said. “I have a passion for this school.”

Streeter has a passion for the game as well, and according to his father, that started at an early age.

“When Brandon was a kid, he came to practice and to our games and he paid attention,” Barry said. “I remember we were playing a game when Brandon was 9. He was in the stands watching with my father, Brandon’s grandfather, and we missed a short kick.

“My dad was upset at the kicker, but Brandon turned to my dad and said, ‘It was the holder’s fault, he didn’t give him a good spot.’ I thought it was pretty sharp of him to notice that at his age.”

There were other signs that Brandon Streeter would be a good coach from the time he was in high school.

“He really paid attention to detail when he was growing up as a quarterback,” Barry said. “We talked a lot about coverage and what to look for from the quarterback position.”

Temperament is another reason the elder Streeter thinks his son can be an outstanding coach at the highest level.

“He doesn’t get flustered,” said Barry, who is among the 25 winningest coaches in the history of Division III football with 183 victories. “He has a good head on his shoulders and understands the game.”

While Brandon won’t directly call the plays in his new job at Clemson, he will mentor the quarterbacks. He has already had a great experience in that regard, coaching Cole Stoudt during the Tigers’ 40-6 victory over No. 24 Oklahoma in the aforementioned Russell Athletic Bowl.

Stoudt had struggled at times during the regular season. But, Streeter helped him regain his confidence in the two weeks leading up to the game. Stoudt completed 26-of-36 passes for 319 yards and three scores and was named the MVP of the game.

Streeter was the starter in 1999, but there was a backup that everyone clamored to see, Woodrow Dantzler. Streeter also had to overcome injuries, but just kept fighting.

“I think it gave me credibility with Cole in that I had been at Clemson and had some similar ups and downs,” he said. “We built a great relationship in a short period of time.”

Now, Streeter must build a relationship with a young Deshaun Watson, who like Streeter in 1999, played in only eight games in 2014 due to injury.

“Deshaun is very talented. I followed Clemson closely this season and saw what he can do. I can’t wait to work with him.”

Working with Watson will certainly take up a big part of Streeter’s spring, but there is something else he is looking forward to.

“I can’t wait for my dad to come down for some spring practices.”