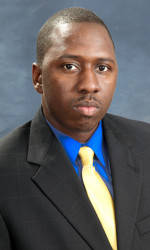 “I’m very pleased to announce that Steve Smith has joined our basketball family as an assistant coach,” Brownell said. “Steve is a terrific person with some very special life experiences. He has a good feel for the game and will be a good teacher and mentor to our players. He has strong recruiting ties in the Southeast and a real passion for Clemson. I’m very excited by his hire and with our coaching staff moving forward.”

Smith coached at Georgia Southern each of the last three seasons under former Georgia Tech assistant Charlton Young. There, Smith was part of a coaching staff charged with leading a program in the midst of a two-year probationary period due to NCAA sanctions stemming from the previous staff. This past season, Smith helped orchestrate an 11-win improvement in the regular season of the Southern Conference, the second-largest single-season turnaround in the conference’s history.

In 2011-12, the Eagles went 15-15 overall, 12-6 in the Southern Conference. Smith coached Eric Ferguson to first-team All-SoCon honors, one year after he was named to the All-Freshman Team. He also coached Willie Powers III, a first-team All-SoCon selection in 2010 and third-team performer this past season.

“Growing up in South Carolina, I knew the history and lineage of Clemson basketball and some of the great things they’ve done in the past,” Smith said. “It’s a highly respected academic institution and well thought of across the country. When Coach Brownell got here, it was an attractive position for me. It’s a dream come true to be at Clemson on his staff. I really like his brand of basketball and like him as a person, as well as the staff they have in place. That sold me on this opportunity.”

Prior to three seasons in Statesboro, Smith was an assistant at USC Upstate in Spartanburg, SC from 2002-09. He was Eddie Payne’s top assistant from 2005-09 during the program’s transition into Division I basketball. Smith helped the Spartans to two straight NCAA Tournament appearances at the Division II level in 2005 and 2006.

In 2004-05, USC Upstate went 24-8 and earned a share of the regular season championship in the Peach Belt Conference. The following season, the Spartans were 20-10 and won the PBC Tournament to again advance to the national tournament. USC Upstate moved into the Atlantic Sun Conference in 2007 for Smith’s final two years on staff.

He coached a number of individual standouts during his time with the USC Upstate program. He coached Kevin Harrington and Jay Free, two-time All-Peach Belt performers who both scored over 1,000 points in their respective playing careers. Daniel Quinlan was the Peach Belt Freshman-of-the-Year in 2005 and PBC Tournament MVP in 2006. He coached Bobby Davis, the Spartans’ leading career rebounder on a per game basis, for two seasons. He also coached C.J. Paul, the older brother of former Wake Forest standout and current NBA great Chris Paul, to the 1,000-point club at Upstate.

Following a two-year playing career at Morgan State, Smith enlisted in the Army and served various assignments from 1994-2000. He joined an All-Army basketball team that played year-round and traveled the country playing exhibition games. After completing his service to the Army, he enrolled at Trinity College in 2000 and earned an undergraduate degree in information systems in 2002. He was an assistant women’s coach at Allen University in Columbia, SC during that time.

Smith is a native of Varnville, SC and was a two-time all-region player for Wade Hampton High School. He led the Red Devils to three conference championships.

Smith and his wife, the former Fran Thompson, have a daughter, Tayler, and a son, Jordan. They also serve as guardians for his nephew, Justin. His second cousin, Dwight Smith, was a professional baseball player for four teams, including the Atlanta Braves, where he was a member of their 1995 World Series team.