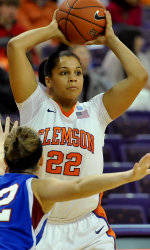 “It feels good and gives us some momentum,” said Coleman, who becomes the third Clemson head coach to win her ACC debut. “NC State is good. We went back and forth. I talk to our team all the time about how this is a new season. We’ve gotten better, and today we proved that we can fight. “

Thomas had her 23 points on 9-18 shooting, including 3-3 from the line, while also hitting two of her five three-point attempts.

“We started running plays for Sthefany, and she came through,” said Coleman. “When she didn’t have a shot, she kicked it out and other players were able to make some plays.” Kirstyn Wright had 14 points, including a huge three with 4:06 to play, as well as the game-winning free throws with 28.1 seconds to play. Jasmine Tate had 13 points and eight rebounds, with two of her boards coming in the closing seconds to help seal the victory.

NC State got a career effort from Bonae Holston, who had 29 points and 13 rebounds, and hit nearly every key shot for the Wolfpack.

The Lady Tigers got off to a quick start, taking an 11-2 lead two and a half minutes into the game. The Wolfpack managed just three field goals and turned the ball over six times in the first eight minutes. However, the Pack did an effective job getting to the line, scoring six of their first 13 points from the line.

Offensive rebounding was the story of the half, with State pulling down 16, led by Bonae Holston’s seven.

Thomas led Clemson with nine points, Tate had eight, while Wright and Mason finished with six points apiece. Clemson shot 44.1 percent, while holding the Wolfpack to 35.0 percent. The Pack hit a higher percentage from three (.412) than they did from two (.321).

NC State responded with a 14-5 run over the next four minutes to take a 64-60 lead on a contested Breezy Williams three from the left wing on a fast break.

Thomas responded with two tough shots, pushing her over her career high. Bryelle Smith knocked in a free throw and Wright knocked in a left-wing three on the fast break after a Smith steal to give Clemson a 68-66 edge with just under four minutes to play.

Smith the hit a step back three with 1:45 to play to give the Tigers a 73-70 lead as time expired on the shot clock. NC State scored the next two to take a 74-73 lead as Amber White got a steal and a fadeaway jumper over Tate to take the lead. Clemson responded by getting Wright to the line, who calmly sank two shots to give Clemson a 75-74 lead with 28.1 seconds to play.

NC State called a timeout, and got a set to freshman Kody Burke. But Clemson shut it down, forcing the Pack into their final timeout with 11.2 seconds to play. The Pack went to Holston, but her layup was short, and Tate pulled in the rebound and was fouled.

She made the first, giving Clemson a 76-74 lead with 7.1 seconds to play. The rebound fell out of bounds to NC State who had one last chance with 5.4 seconds to play. Smith fouled Kastanek running down the floor with 3.7 seconds. Kastanek missed her shot, and Tate came away with the rebound with 2.9 seconds to play and was fouled. She missed both, but an Amber White desperation heave was well short, sealing the 76-74 Clemson win.

“It feels good,” said Coleman. “There’s been a lesson every game so far. We know basketball is a game of runs, and when the other team makes a run its time for us to make ours, and ours come with stops.”

Clemson will return to action on Sunday as they play host to Georgia Tech at 3:00 pm in Littlejohn Coliseum.