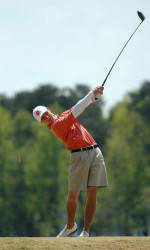 Clemson, SC–Clemson golfer Kyle Stanley finished fourth at the 2007 Northeast Amateur golf tournament at Wannamoisett Golf Club in Rumford, RI on Saturday. Stanley finished with a 72-hole score of two over par 278, just three shots off the pace turned in by champion Dustin Johnson, a recently graduated senior All-American from Coastal Carolina. Stanley was attempting to become just the second Clemson golfer to win the Northeast Amateur. Jonathan Byrd won the title in 1999.

Stanley, a first-team All-American for the Tigers in 2007, had rounds of 66-70-70-72 on the par 69 course, one of the few par 69 golf courses in the world. He tied for fourth with defending champion Carlton Forrester, Jarred Texter and University of Florida All-American Billy Horschel.

It was the third top 30 finish for Stanley in a major summer amateur event in the last three weeks. He finished 11th at the Sunnehanna Invitational two weeks ago with a 282 score, then finished 28th at the Monroe Invitational last week with a 289 score.

Clemson rising junior David May also competed in the Northeast Amateur. He finished 63rd with a 297 score.