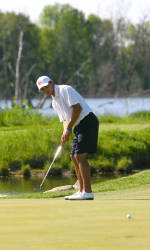 Savage led his match against Andrew Guiliani (New York, N.Y.) 3-up at the turn after making birdie on the 3rd, 5th and 7th holes. Guiliani carded a 7 on the par-4 fifth after rolling his green-side bunker shot back into the sand. With a clear scoring and mental advantage, Savage birdied the ninth, 10th and 12th holes to go 5-up. Guiliani bogeyed the 14th to take the match to 6&4.

Savage will compete tomorrow against Long, who birdied 2, 4 and 7 to go 4-up at the turn in today’s quarterfinal match against Morgan Hoffmann (Saddle Brook, N.J.). Savage bogeyed the 11th, 12th and 14th to go to 1-up, then made a strong birdie putt on 16 to go dormie. Each carded a par on the 17th to finish the match at 2&1.

Ferdinand Aunzo (Philippines) began the round with Lovemark with back-to-back birdies on the second, third and fourth holes. Lovemark birdied the 7th and Aunzo bogeyed the 9th to go all square at the turn. Aunzo bogeyed the 12th and 15th holes, and then missed a crucial birdie attempt on the 16th to take the match to 3&2.

O’Connell and Clemson’s Kyle Stanley traded birdies and bogeys on the front nine to set the match at all-square at the turn. O’Connell later bogeyed both the 13th and 15th holes to Stanley’s birdie on the 13th and bogey on the 17th to return to all-square. Both would birdie the 19th hole and par the 20th. O’Connell’s second shot on the par-4 3rd hole of No. 2 came within eight feet of the hole, making for a quick birdie to win the match after 21 holes.