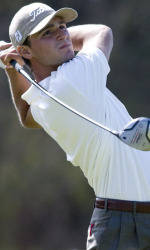 Clemson, SC-Clemson junior Kyle Stanley will begin play in the NCAA Tournament at Inverness on Tuesday, May 26. Clemson did not qualify as a team for the national championships, but Stanley will compete for the individual championship after his third-place finish at the NCAA Northeast Regional at Galloway, NJ 10 days ago.

Stanley will be attempting to become the first Clemson player in history to record three top 10 finishes at the NCAA national tournament. He finished second in 2007 when he was competing as an individual, and seventh last year when he helped the Clemson team to a number-five national finish. Joey Maxon, Charles Warren and D.J. Trahan join Stanley as the only Clemson golfers in history with a pair of top 10 finishes at the national tournament.

It has already been a good week for Stanley. On Friday night he was presented with the Ben Hogan Award as the national player of the year at ceremonies at Colonial Country Club in Dallas, TX. He joins Trahan as the only Clemson golfers to win the award.

Stanley is Clemson’s top golfer this year with a 71.67 stroke average for nine tournaments. He finished in the top 10 in seven of the nine, including a victory at the Carpet Classic in Dalton, GA in September. He finished fifth NCAA Preview at Inverness last fall.

Stanley is ranked second in the United States and seventh in the World Amateur Rankings according to Golfweek. He is seventh in the Golfweek/Sagarin collegiate rankings as well.

As an amateur this year, Stanley won the Southern Amateur in July in Orlando, FL and the Jones Cup in Sea Island, GA in February. Last summer he also played in the United States Amateur and United States Open.

Stanley will tee off at 2:05 PM on Tuesday and will play with Matt Hill of NC State and Hugues Joannes of Lamar. The three players will start at 8:55 on the #10 tee on Wednesday. The final round of individual play will be contested on Thursday.

That will be Stanley’s final round as a college golfer. He has decided to turn professional after the United States Open in June.