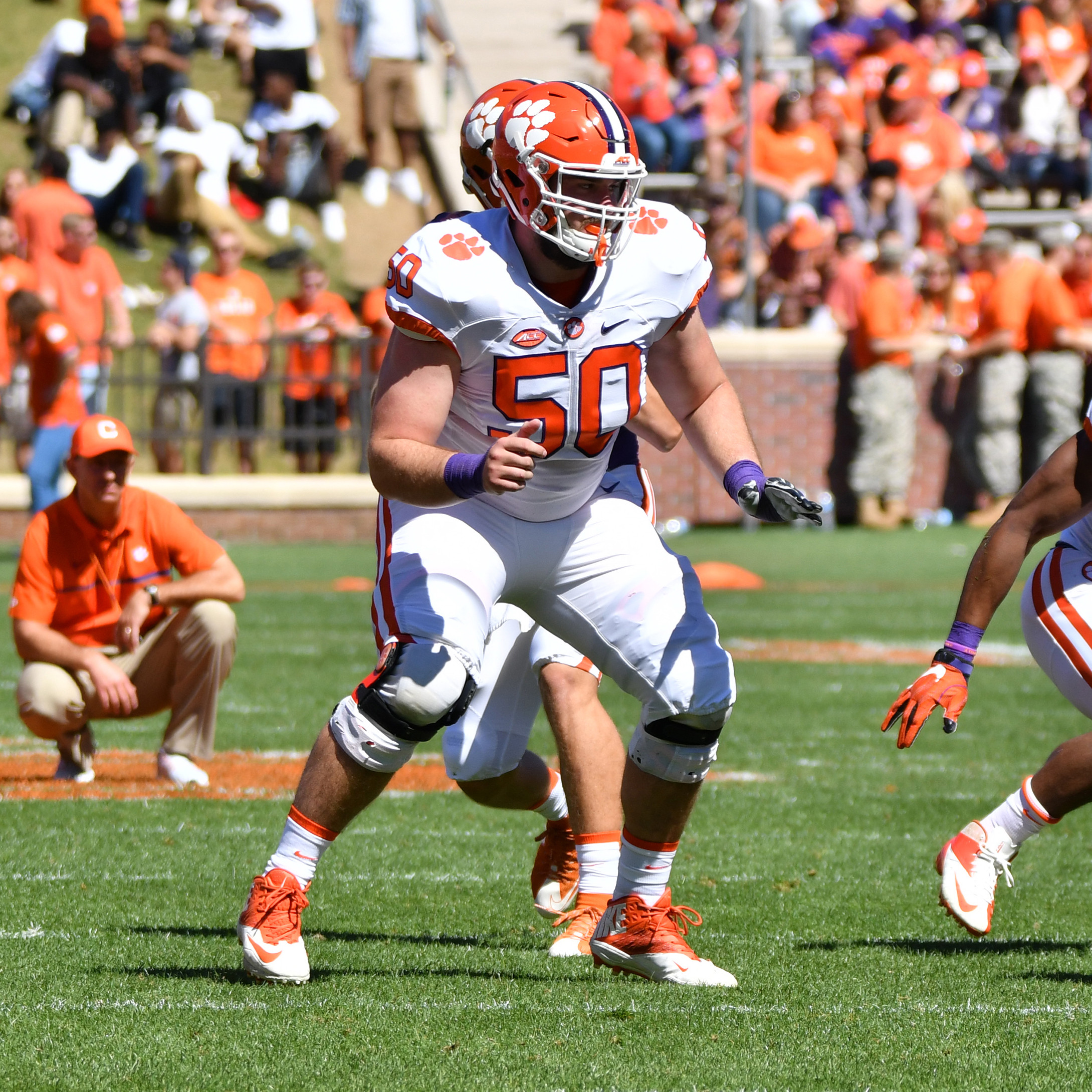 The primary impetus for the spring practice slate in college football is to provide burgeoning contributors with the opportunity to come into their own as players, honing their skills and better establishing their new roles with the team before the true offseason sets in. For the Clemson Tigers, this year’s edition of spring ball perfectly fit that mold, with the high degree of talent from the 2016 team currently making the transition to the NFL resulting in several open slots on the 2017 depth chart. Because of that, several young Clemson players were able to showcase their abilities this spring with eyes fixated squarely on them for the first time as collegians, providing a hint of what is to come in game action from these rising stars.

One such rising star is offensive lineman Justin Falcinelli. Set to be a redshirt junior this coming season, Falcinelli is slated to take over for since-graduated center Jay Guillermo in the starting lineup. Like Guillermo, Falcinelli is a multi-talented offensive lineman with the ability to play in several different positions along the offensive line. Falcinelli, who has in-game experience playing at both center and guard for Clemson, made the full transition to starting center this spring. Despite suffering from a knee injury that cut into his productivity during the latter portion of the spring schedule, Falcinelli consistently performed well in scrimmages prior to that.

Known as a high-IQ lineman, Falcinelli earned his management degree from Clemson in only two and a half years. Perhaps the most underrated position in football in terms of sheer importance, a center effectively serves as an extra set of eyes and ears for the quarterback, meaning that Falcinelli’s intelligence will serve him well as he takes aim at a significant role with the Clemson offense.

“The big thing is communication,” Falcinelli told the media when discussing how he plans to assimilate himself into the offense between now and the start of the 2017 season. “Just being able to come out every day and grind and work and not have any days off.”

Similar to Falcinelli’s situation, rising sophomore wide receiver Cornell Powell had the chance to learn under some of the best in the ACC at his position to better prepare him for a more meaningful role in the offense. Looking to be the next member of the exclusive “Wide Receiver U” regime at Clemson, Powell showed out in spring ball, leading all pass catchers with 78 receiving yards in a late-March scrimmage and 45 yards in the Spring Game.

After playing behind future NFL wideouts Artavis Scott and Mike Williams last season, Powell is primed to make his presence felt in the receiving department in 2017. Standing at 6-0, Powell plays well beyond his stature, as he boasts a sizable catch radius that perfectly complements his impressive speed to make him a viable downfield threat.

Tight end Milan Richard is also poised to have a breakout season in the receiving game, as his diverse skill set will work wonders for him as he transitions into a significant role on the offensive side of the ball. With two-time Mackey Award finalist Jordan Leggett firmly entrenched as the go-to tight end for each of the past two seasons, Richard, who is preparing for his redshirt junior campaign, was mostly utilized on special teams and as a blocker during the first half of his Clemson playing career.

Richard is likely to make his biggest impact near the line of scrimmage in 2017. While Leggett made a name for himself as a deep threat with a tendency to haul in incredible catches, Richard is more of a prototypical tight end, which may be just what the Tigers need as they undergo a widespread changing of the guard on offense.

When discussing his newfound role as a staple of Clemson’s offense, Richard told reporters last month, “It’s a great feeling. It’s something that I’ve definitely been waiting for, so, now, I’m just trying to take advantage of the opportunity.”

Taking advantage of the opportunity is a common theme of every college football team’s spring practice window, and, in Clemson’s case, that theme was obvious from the start, with multiple hard-fought scrimmages that allowed newcomers a chance to shine.

Clemson’s offense will have several such newcomers in the regular rotation this coming season, making the aforementioned players just a few of the possible shining stars that could come to fruition in 2017. If Clemson’s offense of recent seasons is any indication, the opportunities for a rising offensive star to make an impact are virtually endless, which is a reality that is certain to aid Falcinelli, Powell and Richard along their college football journeys.