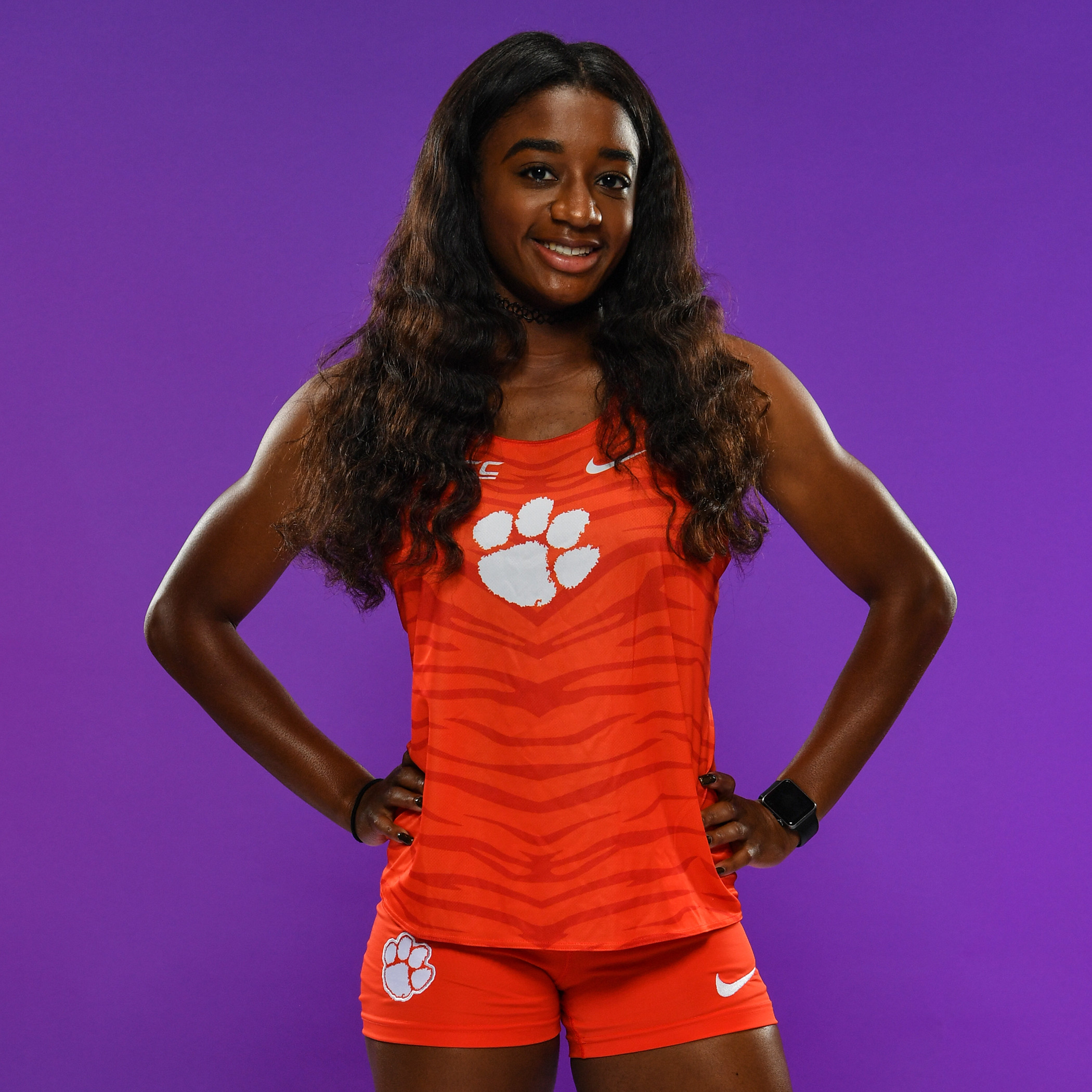 After being told by medical experts that she would never be able to run again, Torie Robinson has become one of the most decorated student-athletes on the Clemson track & field team. The native of Sicklerville, N.J., has earned seven first-place finishes throughout her career at Clemson in the 60m, 200m and as a member of the 4x100m relay unit.

In 2017, she was runnerup in the 60m at the ACC Indoor Championships and helped the Tigers claim first place in the 4x100m at the conference outdoor meet. Robinson has also represented Clemson all three years on the national stage at the NCAA Outdoor Championships.

“When I was a freshman in high school, a group of friends and I went sledding a couple days after Christmas. There was a fence at the bottom of the hill, and every time we went down the hill, we would bounce right off it.

“But this one particular time, we were sliding down and we went through the fence. I tried to get up, but I couldn’t. Eventually, I was able to pull myself up and stand on one leg, but I immediately fell back down.”

Robinson’s friend called her parents, whom then called an ambulance to take her to the hospital. Not knowing what to expect, Robinson received terrifying news.

“The doctors told me I had broken my femur. I went into surgery about five hours later. After surgery, the doctors told my parents that my leg may have to be amputated.”

Two of Robinson’s arteries were severed, but her main artery remained intact, which doctors attribute as the reason for being able to avoid the worse-case-scenario…amputation.

“The doctors told me I would never be able to run again.”

After the surgery, she began the excruciating process of physical therapy. During the recovery process, Robinson recalled her father with her at the doctor’s office and how her mother spoke with Robinson on the phone while there.

“They are doctors and not God,” said her mother. “What do you want to do?”

Robinson adamantly stated that she wanted to run again.

“Then that is what you are going to do!” exclaimed her mother.

After a lengthy recovery process, Robinson returned home, where she was home-schooled for the remainder of her freshman year. She had to wear a foot drop, a brace intended to support her limp foot in which she had no feeling.

Despite not being able to run track, she continued to attend track meets on a regular basis with her mother.

“One day, we came home and I was sitting in my room with the brace off, and I moved my foot. It started moving on its own, and that’s when I knew I still had a chance. And eventually, I started running again.”

Determined more than ever, Robinson had her sights set on returning to running competitively. She began training and planning for her return to the track less than a year after her traumatizing injury. Robinson remembered being at practice one day when she ignored doctors’ orders and attempted her first hurdle since her surgery.

“One day, we were at practice and my teammates were doing hurdles. I wasn’t supposed to be doing them, but I went for it. It was fine. It wasn’t the perfect hurdle, but it was something that I hadn’t done since my surgery. I knew if I kept working harder and harder, I would be able to come back stronger than I was before.”

Sure enough, that is exactly what Robinson did. She was recruited by current Clemson head coach Mark Elliott during her junior year of high school and was offered an athletic scholarship. Approximately two years after being told she would never run again, Robinson accepted Elliott’s offer to join the program, and she has never looked back.

“Coming to Clemson, I felt extremely happy, but I was also nervous at the same time having never been so far apart from my family in New Jersey. It’s an 11-hour drive, but it was something that I had to get use to initially. Eventually, I fell in love with it. The people here make it seem like you’re already at home. The coaches and the staff here are truly incredible.”