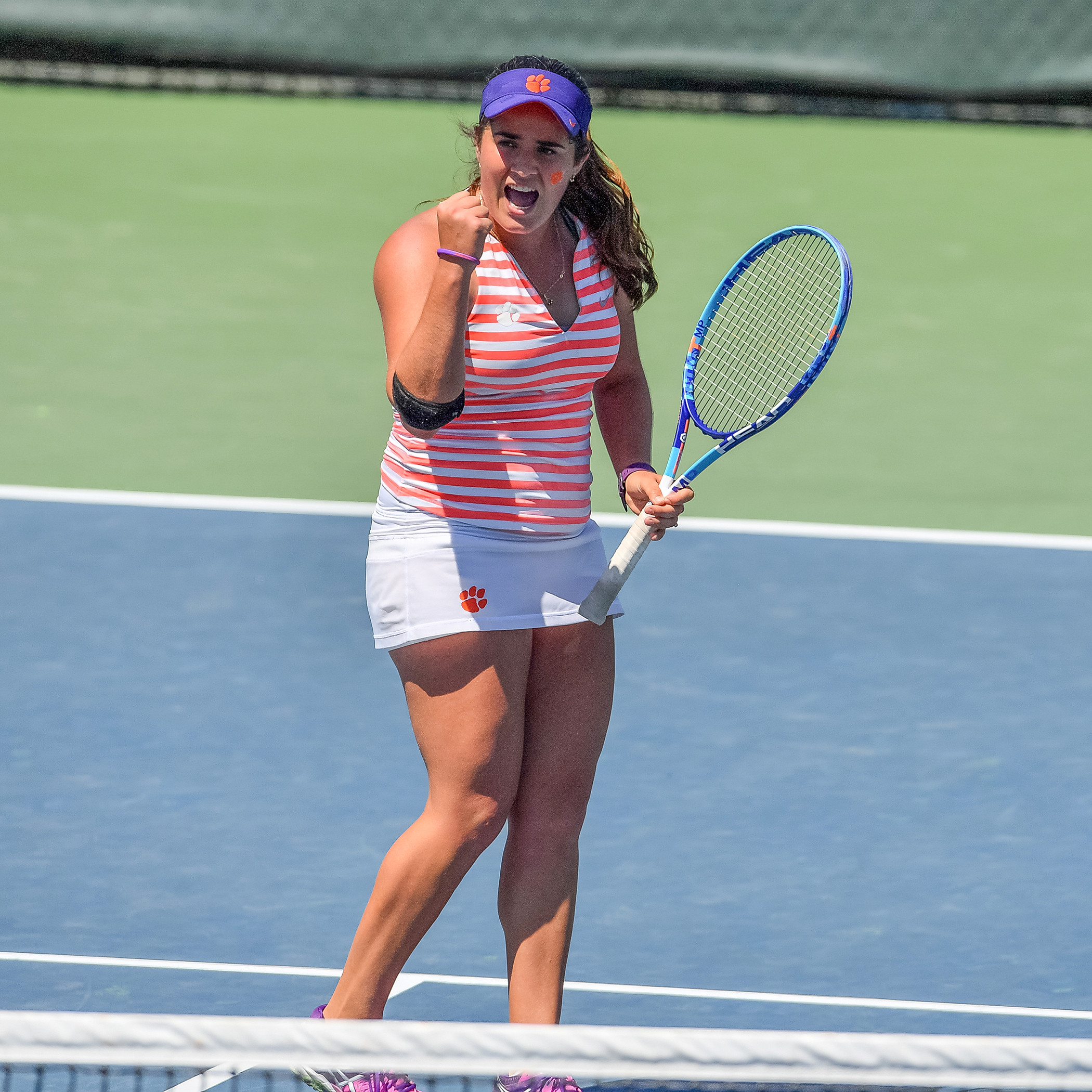 Daniela Ruiz has led by example since the moment she stepped on the Clemson campus in the fall of 2014. When she returned this fall as the lone junior and only upperclassman on a team with five sophomores and two freshmen, that role of leader by example expanded to something much greater.

After hearing Nancy Harris, now in her 20th season leading the program, speak to Ruiz’s abilities as a team leader, it is easy to understand why the native of Beni, Bolivia was entrusted with the role of team captain in 2016-17.

“‘Dani’ defines the word ‘leadership’ with her character,” said Harris. “When she speaks, her teammates listen. They value and trust her words. She speaks from her heart and her message is always unselfish and focused on what is best for the team.

“She has a great love and respect for Clemson and for working hard on the tennis court and in the classroom as an industrial engineering student. She is drawn to commitment and understands the rewards of giving her all despite daily pain and sacrifice. I have such great admiration for her remarkable goodness. She leads by the greatest example.”

Right away, Ruiz embraced her new role on the team, taking the responsibility seriously and to heart.

“Being a captain allowed me to learn a lot more about my teammates and work together with them to grow stronger as a family. We needed a solid base, someone with experience and understanding of the big picture. This made me feel responsible to help my teammates with academics and athletics, to advise and support them. I wanted to lead by example and develop better people, which will make us better teammates and a better team, on and off the court.”

Ruiz, her teammates and her coaches were not satisfied with last year’s results. The squad played a tough schedule, with five foes ranked among the top eight in the nation, seven in the top 25 and 15 in the top 50. The team was chosen for the NCAA Tournament, but it finished 10-11 overall and 8-6 in the difficult ACC.

“Last year, we had a young team, made up of mostly freshmen, with little experience. This year, we understand the big picture. We have a different mindset and are willing to work for everything. We are ready to deal with challenges and take advantage of every opportunity.

“I’m very motivated by the way we have been working together as a team, and it makes me excited for our future. Every day is not going to be perfect, but we will always be there for each other.

“We also have a great group of people around us, with a lot of support and commitment, especially from the staff. They make us love our team and what we do every day.”

In addition to her success on the court, Ruiz is impressive in the classroom. She has been on Clemson’s Dean’s List (3.50-3.99 GPA) all four semesters. Her work ethic obviously extends from the court to the classroom.

“I’m a hard worker and a person who is not afraid of a challenge. I want to know that I’ve given everything every time I do something. Engineering is a difficult major, so I have to be organized with school in order to perform well in the classroom, and also to perform on the court. The opportunity I have as a student-athlete here means a lot to me. Not a lot of people have this opportunity, so I want to take advantage of it.”

While she still has the rest of her junior and senior seasons ahead, Ruiz has already thought about her future.

“I want to go to graduate school, and eventually, I want to create my own company. I will use all of the values Clemson has taught me. I want to be the kind of woman my family can be proud of.”

It seems as though she’s already well on her way.