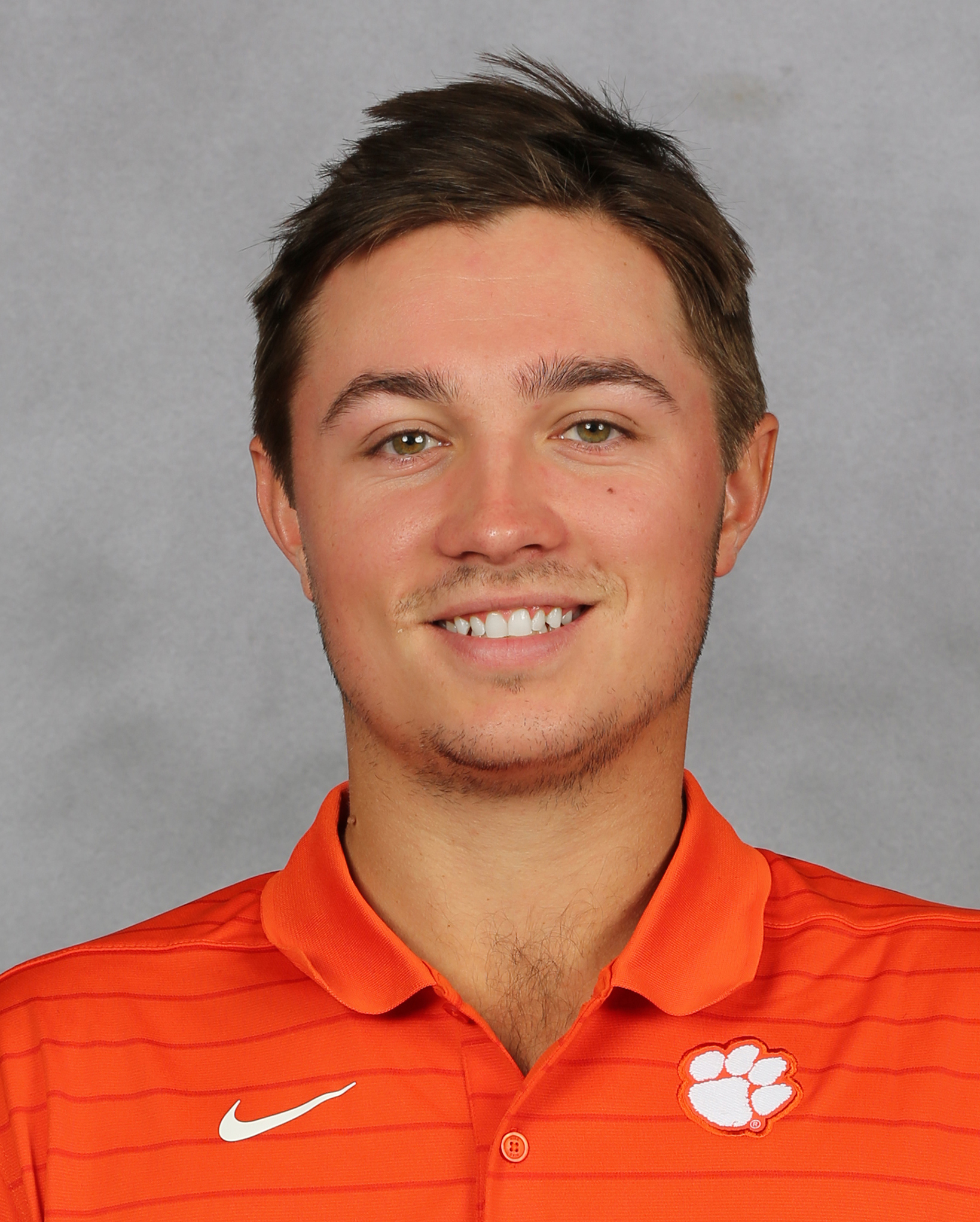 Overview:  In his fifth year as a starter for in 2021-22, he is taking advantage of the extra year provided by the NCAA due to COVID….he and Colby Patton both taking advantage of he rule…Patton and Cottam will join William Nottingham (Super senior in 2021) as the only five-year lettermen in golf in Clemson history.….has career stroke average of 72.34 with eight top 10 finishes…has 23 career rounds in the 60s…has 37 rounds under-par and 13 more at par for an even 50 at par or better…has 363 career birdies, best among active Tigers entering the 2021-22 season…veteran of 111 rounds from 36 tournaments…has nine career eagles, tied for first among active Tigers…starter each of the last four years for teams that have finished in the top 15 in the nation.…has career best 66, twice, including his freshman year at Golf Club of Georgia…first-team All-District in 2021 by Golf Coaches Association….exploded on national scene at 2019 NCAA National Tournament in Arkansas, as he finished in 11th place, best among Clemson golfers by eight shots…received honorable mention All-America honors for that 11th place finish…shot 291, three-over-par for his 72 holes…Clemson’s best player in three of the four NCAA National Tournament rounds after not having the best score in any round prior to Arkansas… fourth on the team in stroke average as a freshman, third as a sophomore, fifth as a junior and third as a senior…but his stroke average was over a stroke better per round than previous year…had 72.91 stroke average as a freshman,  72.79 as a sophomore, 71.76 as a junior and 71.64 as a senior… played in every round for the Tigers as a freshman and 28 as a sophomore…played in 21 rounds as a junior, 18 for the Clemson team … one of three freshman starters on Clemson’s 2018  NCAA National Tournament team … brother Kole was starting catcher for University of Kentucky baseball team and ranked among the top home run hitters in college baseball in 2018…Kole now playing in the Red Sox organization, he has played for the Greenville Drive each of his first three years (2019-21).

In 2020-21:   First-team All-District by the Golf Coaches Association…third on the Clemson team in stroke average with 71.64 figure…ranked #105 by Golfweek and #142 by Golfstat in final computer polls for 2021…started all nine tournaments and had three top 10 finishes…had eight rounds in the 60s, tied for third on the team…had 10 under-par rounds and 13 at par-or-better…scored 75 or better in 26 of his 28 rounds…had four tournaments with double figures in birdies, including a high of 15 at the Kiawah Invitational…consistent player who averaged 71.22 in first rounds and 71.44 in final rounds…had 3.11 stroke average on par threes, 4.08 on par fours and 4.76 on par fives…tied for third on the team in birdies with 87…his score counted in 25 of 28 rounds…had best score of the round four times and had best tournament twice…joined Jacob Bridgeman as only Tigers with 2-0 match play record at the ACC Tournament, a big reason Clemson won the tournament…finished fourth in the stroke play at the ACC Tournament, then beat Paxton of NC State, 3&2 and Norrman of Florida State, 2&1 in match play…his win over Norrman turned Clemson around in the overall match…had first top 10 of the year at Palmetto where his 208 total was good enough for 10th…Clemson’s best player at the John Hayt where he shot eight-under-par 208, to finish second…that was third best score vs. par by a Clemson player in 2021…shot 205 to finish fourth at ACC Stroke Play, then finished 18th at NCAA Kingston Regional with 212 score…finished with consecutive rounds of 70 to help get Tigers into the NCAA National Tournament…in summer of 2021, finished 40th at the Sunnehanna, he had a third round 63 to highlight his performance…missed cut at Southern Amateur…finished 15th at the US Amateur qualifier with a 140 score.

2019-20:   His 71.76 stroke average was fifth on the team, but a stroke per round better than in either of his first two years…had 10 rounds under-par, third on the team, he had two other rounds at even par…played 21 rounds and had six rounds in the 60s…played the 21 rounds at 13-over-par…had his best round of 67 at Ka’anapali Classic on November 2, 2019…led the team in scoring on par-three holes at 2.97 in the fall…had solid 71.14 stroke average in opening rounds…his 75 birdies were third on the team…had best score of the day twice…….played in Sun Bowl All-American Tournament in El Paso in November of 2019 and finished 18th…. played the Carpet Classic as an individual and finished third at the season opening tournament….had team best 14 birdies…that was his best finish of the year…had a streak of seven straight rounds at 71 or better in the fall…played well at Nicklaus Match Play, he had a pair of ties playing with William Nottingham, then had a tie in his singles match against Duke….finished the fall with rounds of 67-70-70 at Ka’anapali and finished 25th….played in both tournaments in the spring before the COVID19 hit…finished 42nd at Puerto Rico with 218 score…had second round 68…finished 17th at the Palmetto with 215 score….highlight there was opening round 67…his play helped Tigers to team victory at the Palmetto

In 2018-19: Led the Tigers at NCAA National Tournament with three-over-par 291 score, good enough for 11th place…had rounds of 74-72-71-74 to lead Tigers to tie for eighth place at the tournament…finished 10 shots better than Clemson first-team All-American Bryson Nimmer… third on the team in stroke average with a 72.79 figure, that was his average for the four NCAA National tournament rounds as well…had three rounds in the 60s, but 11 rounds at par or better…had one round at par and one-under-par at the national tournament, only Tiger to do that … shot 75 or better in 25 of his 28 rounds, including all four rounds in the NCAA Tournament…Clemson’s second best player in three of the last five tournaments….finished 24th at the ACC Tournament with a 215 score, one-under-par after rounds of 69-75-72…also second best Tiger at the John Hayt Intercollegiate in Jacksonville, he finished 21st…fourth among Tigers at the NCAA Austin Regional,  but he had opening rounds of 70 and 72 to help Tigers stay in contention for top five finish…non-counter in the last round with a 77, but his first two rounds were huge for Larry Penley’s team…finished second as an individual at the Hummingbird Invitational where he shot a career best 205 for 54 holes…had career best tying 66 in the final round of the Hummingbird…best round of the spring was opening 68 at the ACC Tournament…had 72.25 stroke average in opening rounds…had 4.02 stroke average on par four holes, second on the team…had 90 birdies for the year and one eagle, he had five eagles as a freshman…had team best 18 birdies at NCAA National Tournament.

2017-18:  Had an outstanding freshman year as starter in every tournament….his 72.91 stroke average ranked eighth in Clemson history among freshmen…strong starter with 71.54 stroke average in his first round, third on the Clemson team….that included opening round 71 at NCAA National Tournament at Stillwater, Okla.…had three top 10s, including second career tournament at Trinity Forest, site of a PGA Tour event, where he had season best 207, six-under-par, to finish third in a national field…had six rounds in the 60s, 11 under-par rounds and 15 rounds at par-or-better…his score counted in 28 of 34 rounds and had best score of the day seven times…hit fairway 72 percent of the time and 65 percent in terms of GIR… five of his six rounds in the 60s were in the fall, but his stroke average in fall and spring were nearly identical… his six-under-par 66 at the Golf Club of Georgia in the fall showed his capabilities, it tied for the second best round of the fall by any Tiger and was the best round posted by a Clemson player on that course in history…Clemson’s best player by four shots that day…five of his last eight rounds of the fall were in the 60s…had third-place finish at Trinity Forest to lead the Tigers with a 207 score, six-under-par…then finished the fall with identical 214 totals at Nike and Golf Club of Georgia…was in contention at Golf Club of Georgia after rounds of 69-66, but then stumbled to a 79 in the final round to finish 37th…had at least 10 birdies in seven consecutive tournaments entering the NCAA Championships, then had nine at Stillwater…had a pair of top 10s in the spring, he finished eighth at Irish Creek to help Clemson to a victory, then finished seventh at Clemson Invitational…shot two-under-par 214 at ACC Tournament…shot 222 at NCAA Regional, but had clutch 72 in the final round to help Clemson to second-place team finish….started out with rounds of 71-74 at NCAA Championships at Oklahoma State, but finished 82-78 and was 75th for the four rounds with a 305 total.

Summer 2017: Finished second at the Tennessee Junior Amateur with a 212 score…had rounds of 70-70-71 for one under par total…shot 142 at his US Amateur qualifier…shot 150 for 36 holes at Tennessee State Amateur in August.

Prior to Clemson: Won Tennessee State championship with a six-under-par score of 138 in October of 2016, five shots ahead of his nearest competitor… led his Knoxville Catholic team to a second-place finish….led his high school team to the regional championship with a fourth-place individual finish in September of 2016…. also fifth at the 2014 state tournament…on the amateur circuit, Cottam had eight top 11 finishes in the last two years on the Sneds Tour….finished fifth at the AJGA Junior All-Star at Innisbrook in 2015 and had three top 10s on the AJGA circuit for his career…a three-time Tennessee Junior Cup player and was Most Valuable Player his final year.

Favorite Course I have Played:   Greenbriar

Biggest Influence on my golf career:  Dad and brother 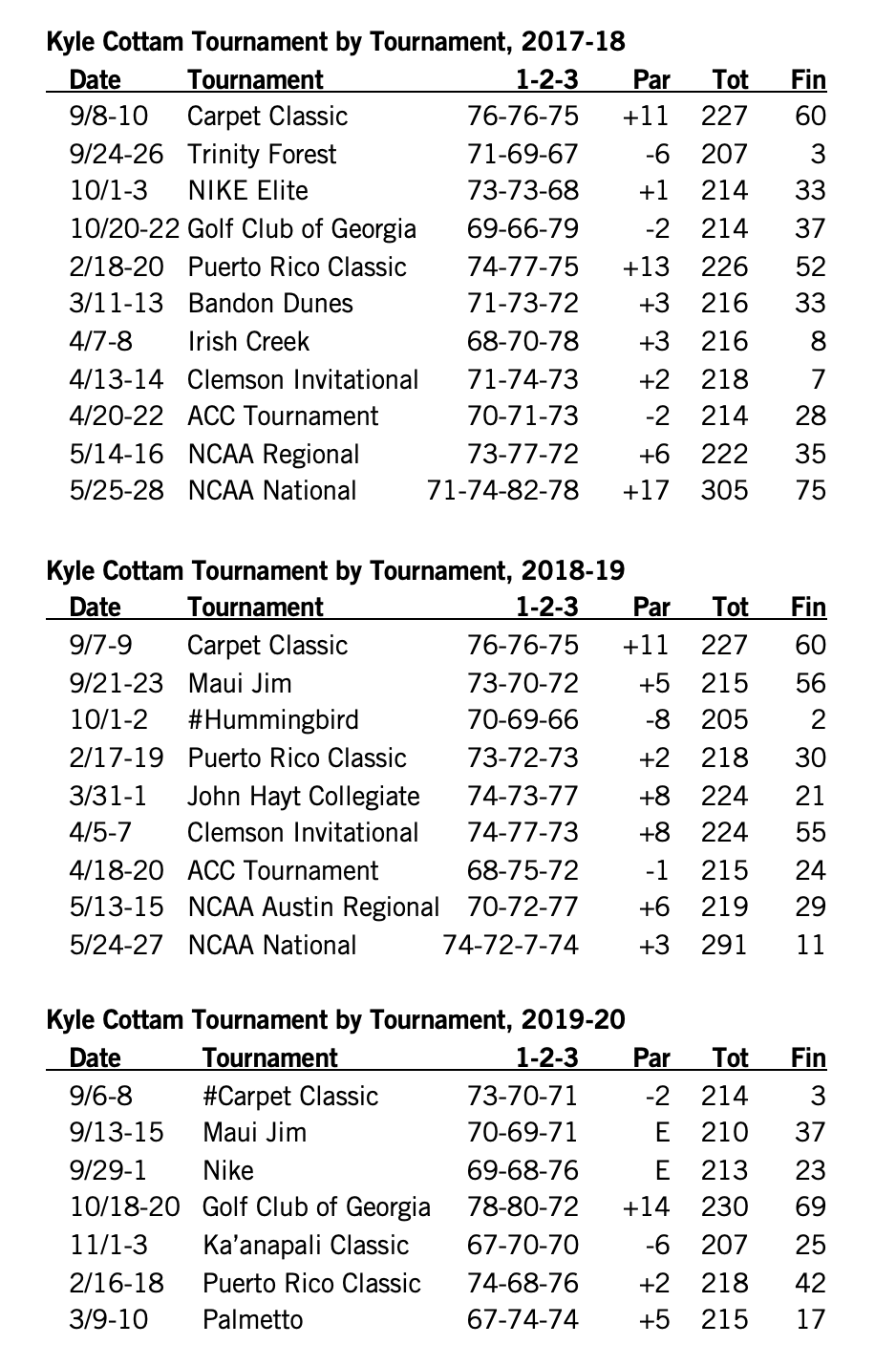 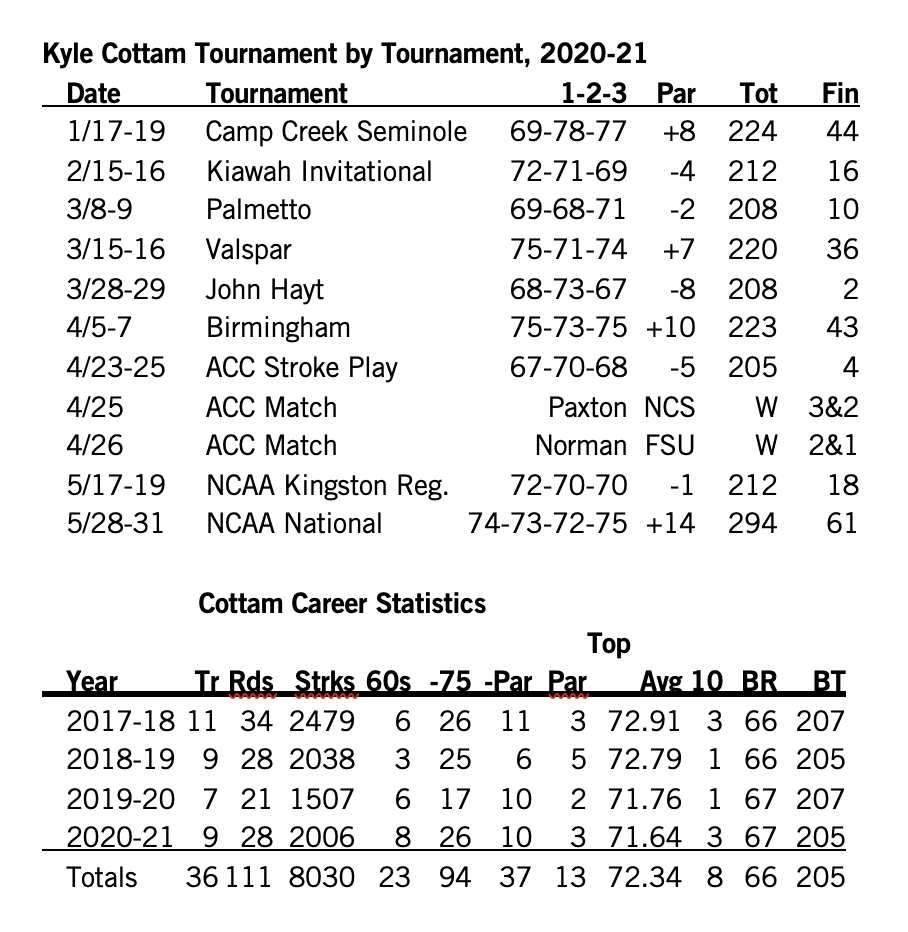