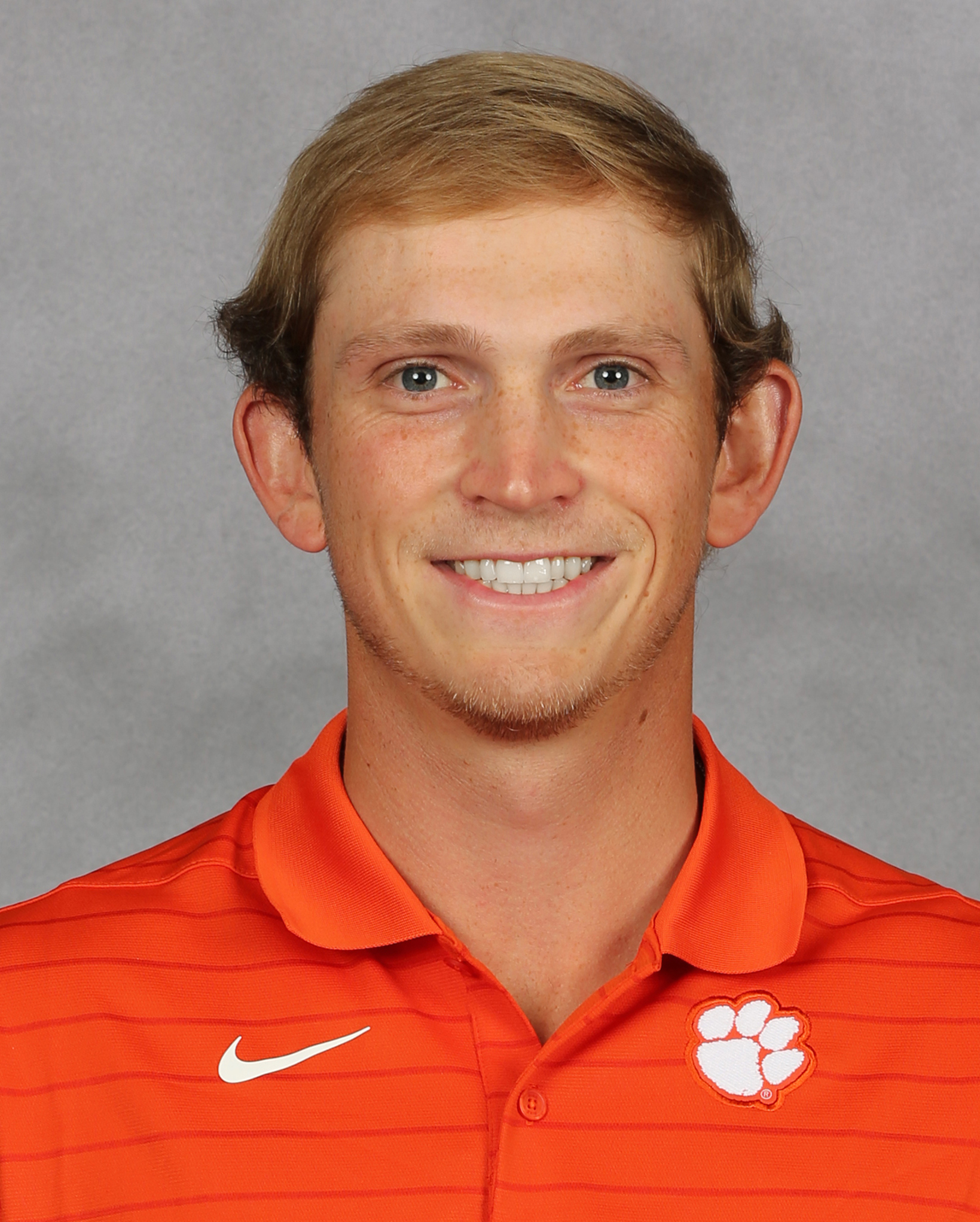 Overview:   ACC Scholar Athlete of the Year for men’s golf in 2020-21…Academic All-ACC and All-ACC on the course….second in Clemson history in stroke average with 70.85 figure, only Doc  Redman is better at 70.70…fourth in Clemson history in rounds in the 60s with 35….two-time All-American, honorable mention as a sophomore and second-team this past season as a junior…two-time All-ACC, he was selected as a freshman and junior….no team was selected his sophomore year….ranked 10th in the nation in the PGA Tour University rankings entering the 2021-22 academic year…he is 45 under par for his last 49 rounds over two years…ranked among the top 33 players in the nation each of the last two years, he was 33rd in 2020 and 14th in 2021….second on the Clemson team behind Turk Pettit in stroke average as a junior, he led the team as a sophomore…had a 70.11 average as a junior and 70.14 as a sophomore… always gets off to a great start, had a 69.11 stroke average for first round as a junior and 69.29 as a sophomore….his score has counted for the Clemson team in 77 of 83 career rounds…has three career tournament wins entering his senior year, two short of Chris Patton’s record…won the Palmetto Invitational in March of 2020 in the last event of the 2019-20 year…won two of the first three tournaments last year, he won the Camp Creek Seminole in the first tournament of the year and captured the Palmetto for the second straight year in the third tournament of the year… so he won three out of four tournaments over the two seasons….76 of his 86 career rounds have been at 75 or better, and 51 of the 86 have been at par-or-better…already has 343 career birdies in just 86 rounds…career best round is six-under 64 at Maui Jim on September 13, 2019, and at Camp Creek Seminole in the first round of 2020-21 on Jan. 17, 202…. Clemson’s second best player behind All-American Bryson Nimmer in terms of stroke average on the Tigers eighth-ranked team of 2019…second on the team in birdies as well (133)… named first-team All-ACC as a freshman…also first-team All-ACC in the classroom…his 71.81 stroke average was fourth best in Clemson history among freshmen…broke Kyle Stanley’s record for rounds in the 60s by a freshman, he had 12, one more than Stanley had in 2006-07 when he was ACC Player of the Year… closed his junior career by reaching Sweet 16 at US Junior Tournament at Baltusrol in June 2018…beat the top seed, Kelly Chinn of Great Falls, Virginia in 20 holes in the second round…played on the United States team in the Junior World Cup in Japan in summer of 2018 as well…finished 21st at that tournament individually….helped lead the US Junior President’s Cup team to victory earlier in the summer, he helped United States team to victory with a 2-1 record..…ranked #14 in the nation among all juniors, ninth in the class of 2018 by Golfweek at the end of the summer of 2018…three-time Individual State High School Champion while playing for Chapman High School in Inman, SC…. Bridgeman had four top 10 finishes at AJGA events in summer of 2017.

2020-21:  Second-team All-American by Golfweek and the Golf Coaches Association…ACC Scholar Athlete of the Year…first-team All-ACC in the classroom and on the course…one of 10 semifinalists for the Dave Williams Award…second on the team in stroke average with a 70.11 figure, but it was third best in Clemson history…that ranked 10th in the nation….led team in under-par rounds with 17 and rounds in the 60s with 13…the 13 rounds in the 60s rank sixth best in Clemson history for one season….had 18 rounds at par or better…..had two bogey free rounds, the first two rounds of the year at the Camp Creek Seminole….had 43 consecutive bogey free holes to start the season, longest streak all year by a Clemson golfer…had a 3.73 average on par four holes at that tournament…had eight birdies in the first round of the year to tie for the season best by a Clemson golfer….shot a Clemson record tying 29 on the back nine at the Palmetto on March 8, 2021…was seven under par for that nine…. Shot 64 in first rouind of the year, he joined William Nottinghgam to become the first Clemson golfers to shoot 64 or better in the same round…won two of the first three tournaments of the year, the Camp Creek Seminole and the Palmetto…shot 15-under-par in winning the Camp Creek and shot 199 in winning Palmetto….finished second at the Birmingham Country Club Invitational…had six top 10 finishes…big reason Clemson won the ACC Championship, finished fifth in stroke play and had a 2-0 record in the Match Play….beat Jon Pak of Florida State, the top player in the nation, 1-up…. 13th in par three scoring average at 3.02…that figure is third best in Clemson history….his score counted 27 of 28 rounds…had 69.11 stroke average in opening rounds of tournaments….had the best round of the day 11 times and was Clemson’s top player at four events…had at least 13 birdies in each of the first seven tournaments of the year.

2019-20: Ranked 33rd by Golfweek and 55th by Golfstat for the 2019-20 season, highest ranking among Clemson golfers….first on the team in stroke average with 70.14 figure, that included 70.87 in the fall… won the 2020 Palmetto Invitational with a 198 score, 12-under-par…one of the top five 54-hole scores in Clemson history…had rounds of 67-66-65 to get the win…had 16 birdies at that tournament that ended up concluding the season due to the Covid19 pandemic…finished 13th at the Puerto Rico Classic with a 212 score…had six rounds in the spring and all were at 71 or better…finished the year with team best 83 birdies, tied for 60th in the nation…ranked 12th in the nation in par four scoring with 3.95 figure…had 10 rounds in the 60s among his 21 rounds, best on the team…his 13 under-par rounds were also best on the team….shot 75 or better in 13 of his 15 rounds, tied for second best on the team…played his 21 rounds at 21-under-par, best on the team…his six-under-par 64 at the Maui Jim was second best round of the fall by a Tiger individual…his 203 at Maui Jim was second best 54-hole score by a Tiger in the fall… got off to great starts, he had team best 69.29 stroke average for his first rounds…his score counted in 18 of 21 rounds …had best score of the day seven times, including four of the six rounds in the spring and was Clemson’s best player at a tournament three times, including both spring tournaments….finished 12th at Maui Jim with a seven-under-par 203 score… finished team best 10th at Nike against a strong field, he had a 208 score, five-under-par…finished 18th at Golf Club of Georgia with 208 score…had strong 66 in first round at Ka’anapali Classic….had  two top 10s, but finished in the top 20 in five of the seven tournaments….his score counted in 18 of 21 rounds.

2018-19:   Second on the Clemson team in stroke average (71.81), top 10 finishes (4), rounds in the 60s (12), under-par rounds (15), rounds at par-or better (18)…only person better was first-team All-American Bryson Nimmer…just 20-over-par for his 37 rounds and 11 of that came at national tournament on the difficult Blessings Course….did not miss a round as a freshman…second on the team in birdies with 133 as well, and his five eagles led the team…averaged 4.03 on par four holes, and 4.73 on par fives….his score counted in 32 of 34 team rounds…had strong 70.18 stroke average in opening rounds, second on the team to Nimmer’s 68.9…opened with an even-par-or-better score in seven of his last nine tournaments…had best score of the day four times and Clemson’s best player for a tournament once…in the Clemson lineup for the first tournament, he shot 220 and finished 34th at the Carpet Classic….shot strong 212 at Maui Jim, he opened with rounds of 69 and 67…had first career top 10 at Golf Club of Georgia where he shot 211, five-under-par, for seventh place…followed that with another top 10 at the Ka’anapali with a nine-under-par 204 to finish ninth….played in the Puerto Rico Individual Tournament and finished in a tie for first at four-under 209…had fifth-place finish at the Palmetto with a 207, he was Clemson’s best player by two shots over Nimmer….that gave him four straight top 10s…finished 14th at Clemson Invitational where he was -8…had solid performance in Austin Regional with 217 score to finish 20th…ranked 103rd  in the nation by Golfweek’s final ranking, second highest ranking on the Clemson team….he was #139 by Golfstat…63rd  in the nation in total birdies with 133.

High School: Bridgeman was a second-team AJGA All-American, the first Clemson signee to make a first or second-team AJGA All-American team since Billy Kennerly in 2011…. won his three state championships by six, five and nine shots as a sophomore, junior and senior, respectively…won Spartanburg County, Region 3A, Upper State and 3A State Championships as a junior and senior…won The Blade, Grand Bennet Junior, Jimmy Self Junior and Beth Daniels Junior Azalea….in summer of 2018 finished tied for ninth at National Junior Amateur, fourth at the Trans-Mississippi Amateur, ninth at the Azalea Amateur, 36th at North-South Amateur in Pinehurst…posted a 70.8 stroke average as a junior….played his high school golf for Dustin Batson….majoring in mathematical sciences as Clemson, same major Doc Redman had at Clemson….born 12-6-99. 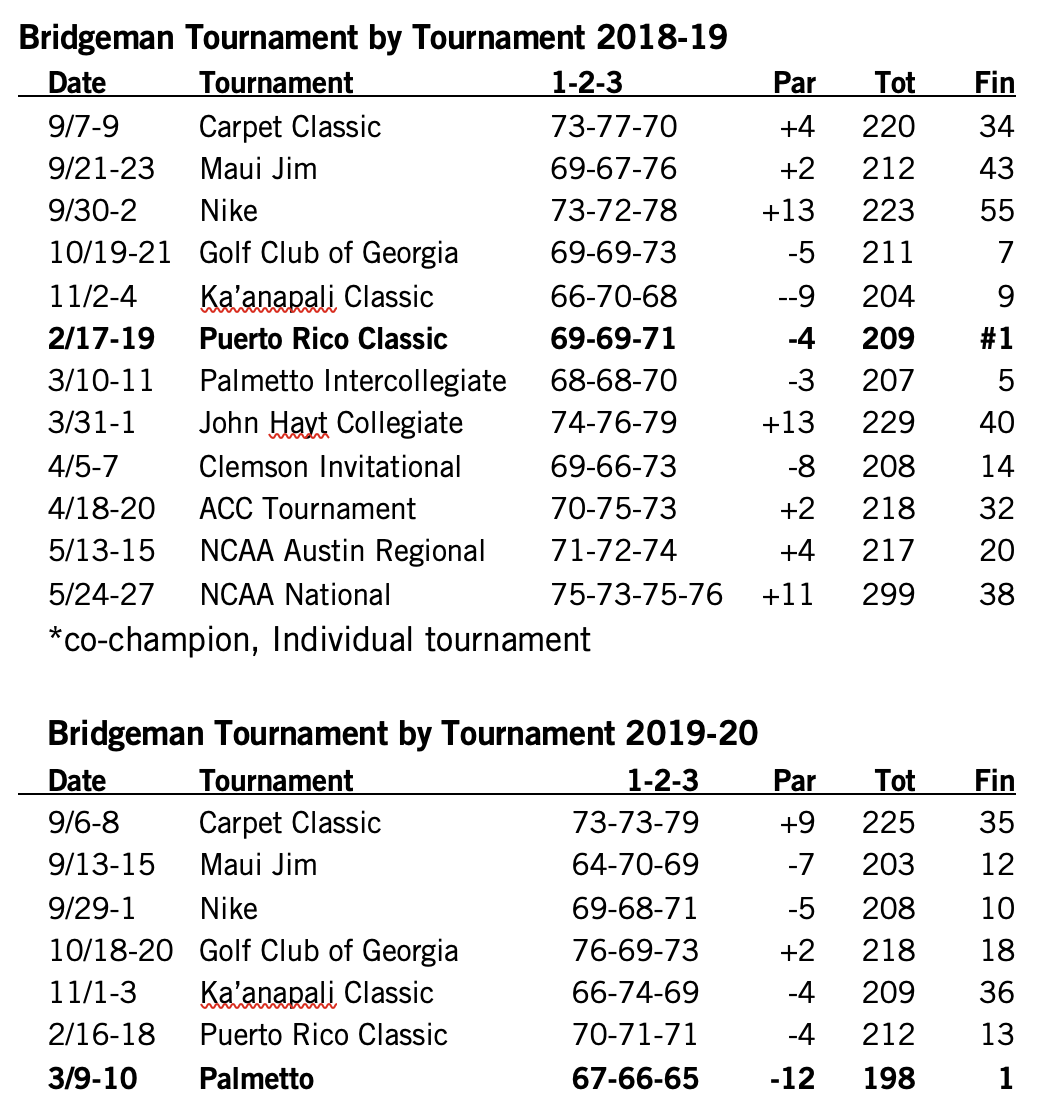 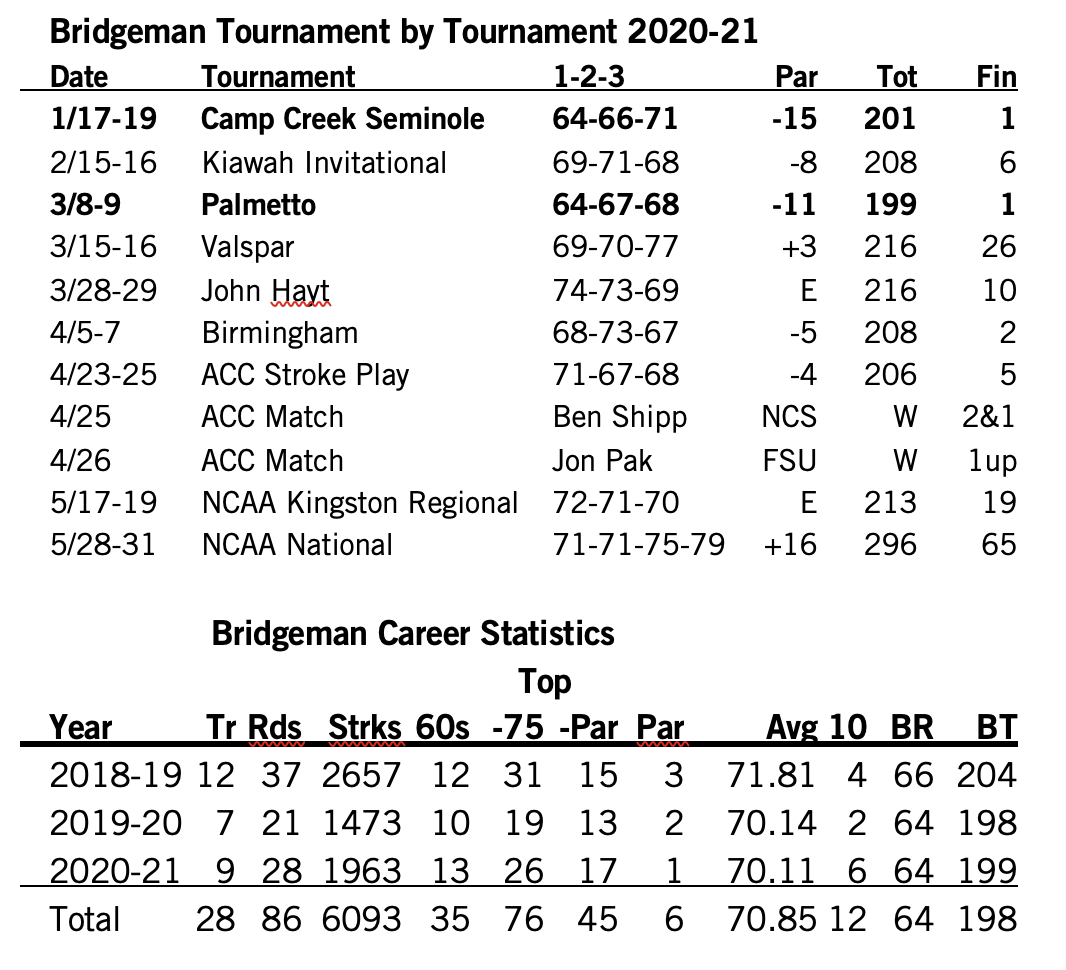