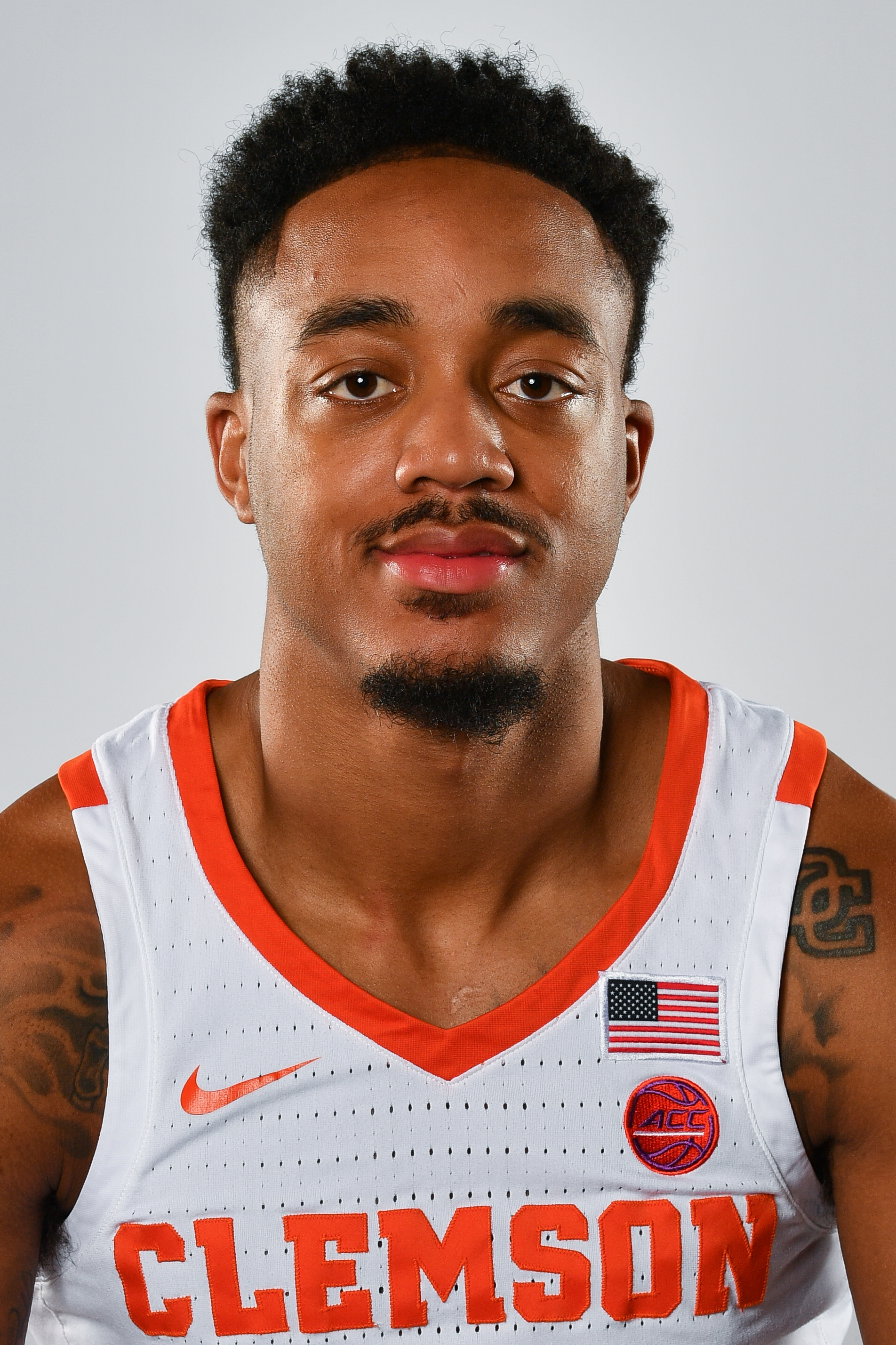 Overview
Exploded onto the scene in 2017-18 and turned in one of the best seasons for a Clemson guard of all time … became just the first player since Billy Williams in 1980 to post 500 points, 100 rebounds, 50 assists and 50 steals in the same season … transfer from Robert Morris University played his first season at Clemson in 2016-17 … sat out 2015-16 as a redshirt, per NCAA rules … gives the Tiger program an experienced, consistent scoring guard … came to Clemson with NCAA Tournament experience, helping RMU to the round of 64 as a freshman in 2015 … scored over 500 points as a first-year player at the DI level … in two seasons, has appeared in 68 contests and scored 858 points … on track to reach 1,000 early in his junior season … career 46.5 percent shooter, he also is over 40 percent for his career from three (66-162) … career 83.5 percent shooter from the free throw line … signed a financial aid agreement with Clemson after official visit in May … recruited by former assistant coach Richie Riley … played AAU basketball with Crusader Nation … majoring in sports communication.

• Clinched his third career 500-point season of his career and the second such season at Clemson. Posted the 14th-most points in a season last year (553) and sits at 520 with at least two games left to play.

• Finished his senior season 84.3 percent from the foul line – the fifth-best mark by a senior in Clemson history.

• His 150 makes from the foul line are tied for 6th-most in a single season in Clemson history.

• He is now 9th in program history with 170 career steals.

• His 1.72 steals per game ranks third-best in Clemson history.

• Finishes senior season with 2.13 steals per game – tied for the 5th-most per game in Clemson history with Vernon Hamilton (2004-05).

• Posted 28 20-point games in his career as a Tiger – tied for the 8th-most in Clemson history.

• Made 366 free throws at Clemson – 8th-most in Clemson history.

• Posted the program’s 24th “Triple Leadership” with 20 points, a career-high 13 rebounds and four assists against The Citadel. He also posted a team-high four steals so it also served as the program’s 11th “Quad Leadership”.

• Tied his career-high with nine made free throws against Saint Peter’s (Dec. 4).

• Tied career-high with nine made free throws against Miami (Feb. 13).

• Posted fifth career double-double at Louisville (Feb. 16) with 13 points and 12 rebounds. It was his fourth career game with double-digit rebound

• Scored 24 points against North Carolina (March 2) and tied his career-high with five steals.

2017-18
Started all 35 games for the Tigers during the regular season and averaged 34.9 minutes per game … was an All-ACC Second-Team selection … earned ACC Player of the Week once during the season … led the team in scoring with 15.8 points per game … added 4.7 rebounds, 3.3 assists and 1.7 steals per contest … shot 84.5 percent from the line to lead the Tigers … became the all-time free throw shooting percentage leader after reaching the 100 made free throws in a Clemson uniform (87.1 percent) … the previous record stood for nearly 50 seasons … shot a 43.0 percent from the field, including 35.4 percent from three … produced a positive assist-turnover ratio (116-80), he was second on the team in assists … led the Tigers in steals with 58 … scored in double-figures in 30 games, including 11 in which he scored at least 20 points … was key for the Tigers in ACC play following Donte Grantham’s injury, averaging 17.3 points in league play while shooting 42.7 percent from the floor in 37.0 minutes per contest.

BEST GAMES, 2017-18
Set a new career-high with 28 points in a loss at Virginia Tech … totaled his third career double-double with 10 rebounds in that game … tied the program record for threes made in a single game with eight against the Hokies in a road loss … became the 26th member to post a “Triple Leadership” in a game when he scored 20 points, grabbed eight rebounds and tallied five assists in a home loss to Duke … made five or more shots on 17 occasions, including a career-best nine at Florida State in a 25 point effort … netted his first 20-point game of the season in a 14-point win at Ohio State in the ACC/Big Ten Challenge … major contributor to a 27-point turnaround in that game … scored the game-winning basket in a 72-70 win at Georgia Tech with 25 seconds left in regulation … posted a double-double with assists in the game with a career-high 11 dimes … put together a team-best 14 consecutive free throws made stretch that lasted from a home win vs. Miami to a home win vs. Notre Dame … posted three double-doubles on the season, one with assists and two with rebounds … played a career-high 44 minutes in an overtime win over Louisville, scoring 24 points and setting a career-best with five steals … appeared in all five postseason games for the Tigers, including three NCAA tournament games … averaged 14.7 points and 6.0 rebounds in the NCAA tournament … finished the season as the first Tiger to post at least 500 points, 100 rebounds, 50 assists and 50 steals since Billy Williams in 1980 … Reed was just the third player in the ACC this season to accomplish that feat (Grayson Allen and Ky Bowman).

2016-17
Appeared in all 33 games for the Tigers, all as a reserve … averaged 21.5 minutes per contest … one of four Tigers to score double figures for the season, he averaged 10 points per game … highest scoring reserve at Clemson since Terrence Oglesby (10.5 points per game) in 2007-08 … shot 90.6 percent at the free throw line, second-best in Clemson history and third-best among ACC players for the season … began and ended the season by making 19 consecutive at the charity stripe … also shot 40 percent from three-point range, one of three players from Clemson to achieve the mark … produced a positive assist-turnover ratio (64-40), he was second on the team in assists … led the Tigers in steals, despite not starting a game … produced 46 steals, one of the top figures in Clemson history by a reserve … scored double figures in 16 games … one of Clemson’s top clutch performers, he hit key baskets in wins against Georgia, South Carolina, Pittsburgh and Wake Forest, with several more in close losses … averaged 10.7 points per game against ACC competition, shooting 43 percent from three.

BEST GAMES, 2016-17
Averaged 21 points per game in the regular season sweep over Wake Forest … poured in 17 in the second half as Clemson rallied to a 15-0 run to close the win in Winston-Salem … made 6-11 shots and added four steals in 25 active minutes … in the home win over the Demon Deacons, hit career-best nine of 10 free throw attempts … added five rebounds in 32 minutes … opened Clemson career with 19-point effort against Georgia, the most points in a Tiger debut since Elden Campbell in 1986 … made 3-6 threes and all six of his free throws versus the Bulldogs, while adding three steals in 28 minutes … posted 13 points in game against Oklahoma, which included a 4-6 clip from three … scored 14 points in upset of top-25 South Carolina team that went on to a Final Four berth, he made the final go-ahead free throws in the game … posted 17 points against North Carolina, making 5-9 field goals, including a late three to send the game into overtime … produced 13 points at Louisville … scored 10 at Pittsburgh, including a key layup late, to help lift the Tigers to a win …  notched 12 points at Florida State … posted 15 at Miami and followed with 18 at Virginia Tech … sank 4-6 three-pointers against the Hokies and nearly delivered a win for the Tigers in a hostile road environment … posted nine points and a season-high six assists against Syracuse … notched 13 in the ACC Tournament game with Duke, including 7-7 at the stripe.

2014-15 (at Robert Morris)
Started 28 of the Colonials’ 35 games, averaging a team-high 15.1 points per game … also averaged 27.8 minutes per contest … Northeast Conference Rookie of the Year after tallying 529 points for the season … shot 49 percent overall, including 41.3 percent from three-point range … also shot 78 percent at the free throw line … made 197 field goals in his only season at RMU … showed quick hands defensively, notching 67 steals … posted 20 or more points in 11 games … made double-digit field goals on two occasions … impressive in three games against ACC competition, tallying 24 points against North Carolina (Nov. 16) in his second career game, 21 against Clemson (Dec. 30) and 22 against the eventual national champion Duke Blue Devils (March 20) … made 10-15 field goals against the Tar Heels in the Smith Center … shot 9-14 in the loss to Clemson, adding three steals … made 8-9 field goals and 6-6 free throws in 22-point game against St. Francis (Jan. 5) … made 10 field goals and posted 24 against Sacred Heart (Jan. 18) … posted 22 points at LIU Brooklyn (Feb. 5) … scored 22 against Wagner (March 4), with three steals … posted 19 in NCAA First Four matchup with North Florida, hitting 9-17 field goals.