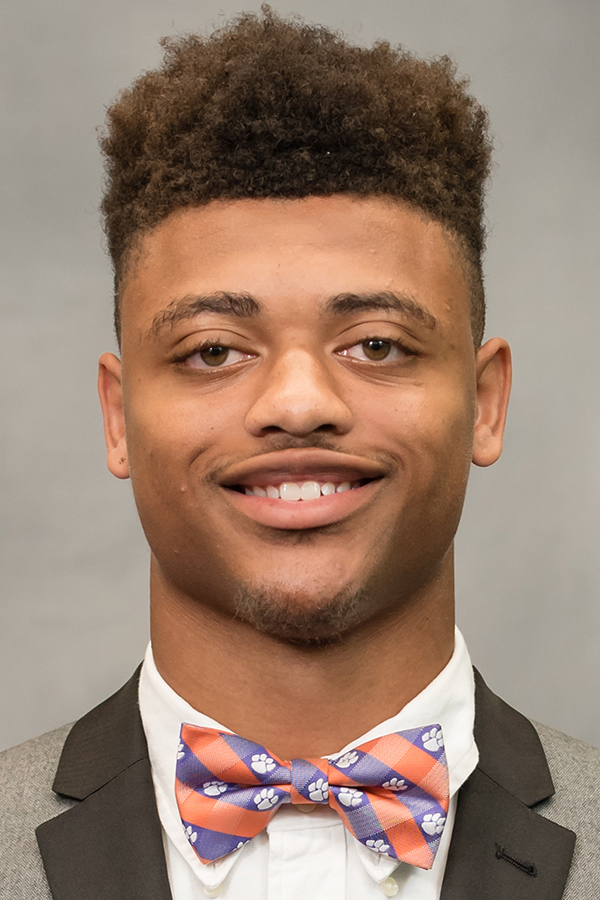 Concluded his three-year Clemson career credited with 107 career tackles (3.5 for loss), 20 pass breakups, six interceptions (returned for a total of 160 yards including a 44-yard touchdown) and two forced fumbles over 1,827 snaps in 44 games (30 starts) … started all 15 games in his first year as a starter in 2018, scoring the first points of the College Football Playoff National Championship on a pick-six … helped Clemson to a 29-1 record in two years as a starter.

2018: Third-team All-ACC … credited with 53 tackles (2.0 for loss), seven pass breakups, a team-high three interceptions and a forced fumble in 805 snaps over 15 games (all starts) … credited with five tackles at Texas A&M … notched three tackles and a pass breakup at Georgia Tech … made three tackles and collected Clemson’s first interception of the year vs. Syracuse, helping jumpstart the team’s comeback victory … earned team co-defensive player of the week honors for his performance … recorded four tackles and a pass breakup at Wake Forest, also earning team special teams player of the week honors for his role in limiting the Deacons’ dynamic return game … collected two tackles and two pass breakups vs. No. 16 NC State … added another two tackles at Florida State … made one tackle vs. Louisville … earned team defensive player of the week honors at No. 17 Boston College for his five-tackle performance in helping hold the Eagles to only nine rushing yards and 113 total yards … made a season-high seven tackles and recorded a pass breakup vs. Duke … notched four tackles vs. South Carolina … posted five tackles and returned an interception 31 yards to set up a one-play scoring drive in ACC Championship Game against Pitt … recorded three tackles and a pass breakup as Clemson held No. 3 Notre Dame to three points in the Cotton Bowl … posted a superlative performance in the National Championship Game vs. No. 1 Alabama, collecting a season-high eight tackles and opening the scoring with the first defensive touchdown in CFP National Championship Game history on a 44-yard interception return … earned an All-Bowl Team selection from Rivals for his performance in the College Football Playoff.

Before Clemson: Highest rated signee among the 2017 signing class by any service, he is No. 13 overall and a five-star prospect in the nation by Rivals … played in the Under Armour All-American game in Orlando, Fla … .No. 2 at his position and in the state of Georgia by Rivals … rated No. 55 prospect in the nation by 247 Sports, sixth-best at his position and seventh-best in the state of Georgia … rated No. 96 overall in the nation by Scout, which ranks him as the sixth-best player in the region and 10th-best at his position … No. 106 prospect overall, No. 9 at his position and No. 15 in the state by ESPN … played in the secondary and at quarterback and receiver as a senior, helping Westlake to an 11-4 record and semifinal appearance in the state playoffs … had two touchdown receptions and one rushing score against East Coweta in a 37-34 win as a senior … committed to Clemson on Aug. 19, 2016 … AAAAAAA Player of the Year in Georgia by the Coaches Association … played his senior year for Kareem Reid … first-team all-state in 2016 by the Atlanta Journal-Constitution … as a senior, had 53 tackles, 36 first hits and 17 assists … added eight tackles for loss, two interceptions, and 13 passes broken up … as a junior, had 55 tackles and two interceptions on defense … also had team-best 16 passes defended … scored eight touchdowns as a junior, five on receptions, one on a fumble return, one on an interception return and one on a kickoff return … averaged 30 yards per kickoff return as a junior … wore #8 in high school … selected Clemson over Florida, Alabama and Georgia … recruited by Mike Reed.