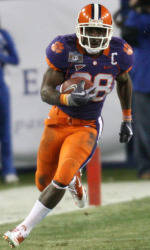 Spiller will be the recipient of the 2009 National Kickoff Returner Trophy from the College Football Performance Awards, which selects recipients based on objective scientific rankings. He will receive the award from Executive Director Brad Smith and assistant director Dr. Harold Smith.

The native of Lake Butler, FL finished sixth in the 2009 Heisman Trophy voting, tied for the highest in Clemson history. He established 32 Clemson records for his career, including all-purpose running with 7588 yards, second most in NCAA history.