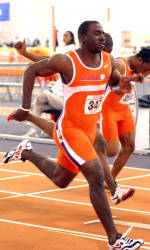 Spiller’s time is currently the top collegiate mark in the country, as well as best by any American in track & field so far this indoor season. He ran a 6.69 in the prelims, and then ran away from the field with his time of 6.58 in the final. His previous best heading into last weekend was a 6.71, run earlier this year at the Clemson Invitational.

He is now the second automatic qualifier in the 60m dash from Clemson’s sprint group, joining defending NCAA champion in the event, Travis Padgett. Both have now also been named ACC Performer-of-the-Week this indoor season.

Spiller’s time of 6.58 ranks fifth in school history, quite an achievement considering the four decorated sprinters ahead of him on the list. Michael Green, a three-time NCAA champion and former Olympian, ranks second with a time of 6.55. Padgett is tied for third with another three-time NCAA champion and former Olympian, Shawn Crawford, at 6.56 seconds.

In a short amount of time, Spiller has made his mark on Clemson athletics. He was second-team All-ACC in football as a standout freshman, then honorable mention All-ACC in 2007 as a kickoff return specialist. In track, he earned All-America honors with the 4x100m relay team at the 2007 NCAA Outdoor Championships. He was also All-ACC in the 100m dash last spring.