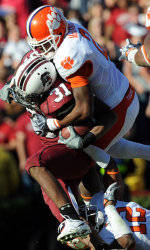 CLEMSON, SC – Clemson senior all-purpose player DeAndre McDaniel were both named to the first-team All-America team by the Football Writers Association of America on Saturday. It was the fourth first-team selection for Spiller out of the four teams that have been announced so far.

It was the first first-team selection for McDaniel, who ranks second in the nation in interceptions with eight. The safety from Tallahassee, FL had been named second-team All-American by CBS Sportsline earlier.

Clemson was one of just four schools to have at least two first-team All-America selections this year. Alabama had three to lead all schools, while Clemson, Florida and Texas had two apiece.

This marks the first time since 1991 that Clemson has had two first-team selections on the same team. That year Levon Kirkland and Jeb Flesch were both named to the Walter Camp team. This is the first time Clemson has had two first-team All-Americans according to the Football Writers team since 1981 when Jeff Davis and Terry Kinard, two former Tigers now in the College Football Hall of Fame, were selected.

There were only three ACC players named to the Football Writers All-America team this year. In addition to Spiller and McDaniel, Florida State offensive lineman Rodney Hudson was also selected.

Spiller was named the ACC Player of the Year earlier, the first Tiger to receive that honor since Michael Dean Perry in 1987. He ranks fourth in the nation in all-purpose yards with 194 yards per game. He is the only player in the nation to score at least one touchdown in every game this year and has 20 overall, an all-time Clemson record.

A finalist for the Doak Walker Award, Spiller had 233 yards rushing in 20 attempts and scored a career high four touchdowns in the ACC Championship game against Georgia Tech on December 5. He now has 1145 rushing yards this year and 445 receiving yards. He has 50 career touchdowns and needs just one to become Clemson’s career leader.

McDaniel, a junior from Tallahassee, FL, has eight interceptions to rank second in the nation and first in the ACC. He needs just one more to establish the Clemson single season record. He has been the leader of a Clemson team that ranks third in the nation in interceptions and 11th in pass defense.

McDaniel has 87 tackles from his safety position, including two sacks. He has 10 total passes defensed. He was named National Defensive Player of the Week for his performance at Miami in Clemson’s 40-37 overtime victory. He had two interceptions in that game, including one that he returned for a touchdown.