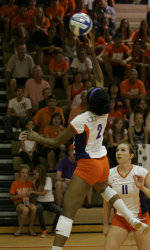 Clemson (10-2, 1-0 ACC) claimed its third tournament title of 2010, as the Tigers earlier claimed the Big Orange Bash and Carolina Classic titles. The Tigers are 6-0 this season at home, and 9-0 in matches played in the state of South Carolina.

Sandra Adeleye was named MVP of the Tournament, closing Sunday with ten kills in 14 attacks and seven blocks. For the tournament, she averaged 3.09 kills and 1.27 blocks per set.

Alexa Rand also earned All-Tournament honors, emphasizing her clutch play against Georgia Tech. The sophomore middle had 16 kills in 31 attacks overall, posting a .452 hitting percentage, while also collecting 16 blocks in the three matches. She two consecutive blocks with the score tied, 13-13, against Georgia Tech to clinch the Tigers’ ACC opener on Friday night.

Serenat Yaz led all players on Sunday with 11 kills, and also added six digs and two blocks. Natalie Patzin had seven kills with no errors, giving her 32 kills on the weekend, a 2.91 per set average, second-best on the team. She also had eight digs against the Rattlers.

Freshman Mo Simmons had five kills on eighth attempts Sunday, and had 22 kills and hit .442 for the weekend, after posting a career-best 10 kills on Saturday against Georgia State. Her hitting percentage led all players in the tournament, as did her four aces.

Defensively, Clemson put forth a strong effort, holding the Rattlers to .054 hitting and blocking 12 FAMU attacks. Cansu Ozdemir had nine digs to lead the Tigers, and she had 41 in the three-day tournament, most of any player in the tournament.

Clemson built a quick lead in the first set, and never trailed, as the took a 17-8 lead. FAMU closed to 18-12, but Clemson went on a 5-0 run to all but clinch the set. The Tigers hit .545 in the set, and had three total blocks. Patzin and Yaz had four kills apiece to lead the Tigers.

In the second set, it was Florida A&M who was the early aggressor, racing out to an 8-3 lead and forcing a Tiger timeout. Clemson responded, going on a 6-0 run to take a 9-8 lead, and never looking back, stretching the lead to 14-9, an 11-1 total run. Up 20-15, the Tigers went on a 5-0 run to close the set. Adeleye had six kills and the Tigers registered five blocks, including three from Rand.

In the final set, Clemson went on an 8-0 run, opening up a working margin. That proved ot be the difference, as the Tigers took the set, 25-17. Yaz had five kills, while sophomore Brooke Kohler registered four kills in four swings, including Clemson’s final point of the match.

Clemson returns to action on Friday at 7:00 pm as they host Wake Forest in an ACC contest. Preseason ACC-favorite Duke then comes to town at 6:00 pm on Saturday for Clemson’s designated “Solid Orange” home event. Admission to volleyball is free for all fans.