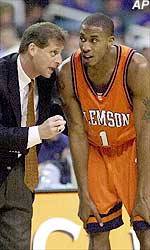 Solomon To Stay In NBA Draft

“I have decided to keep my name in the NBA draft and continue to develop my game in the NBA next season,” said Solomon. “I have collected a lot of information over the past six weeks, and while I have no guarantee that I will be selected in the first round, I do feel confident that my hard work and determination will lead me to the NBA next season.

Solomon was a first-team All-ACC player as a sophomore and a second-team selection as a junior. This past season he averaged 19.7 points a game, fourth highest in the ACC, after scoring 20.9 a game as a sophomore, best in the conference. He scored 1218 points over the last two years, 20.3 points a game.

Had he returned for his senior year he would have needed just 450 points to break Elden Campbell’s Clemson career scoring record of 1880 points. When he was named first-team All-ACC in 1999-00, he was the first Tiger to earn first-team All-ACC honors in 10 years, the first sophomore or freshman selected in 25 years.

Solomon owns 15 Clemson records, including most consecutive double figure scoring games. He had a streak of 52 consecutive double figure games over his sophomore and junior seasons. He also set a school record for three-point goals per game in a season, and an ACC record for scoring average improvement over consecutive years. He made a 14.6 points per game improvement from his freshman year (1998-99) to his sophomore season (1999-00).

He had a pair of 40-point scoring games over the last two years, 43 against Virginia on January 15, 2000 and 41 against Georgia Tech on January 24, 2001. His most memorable game, however, took place on Feb. 18, 2001 when he scored 26 points in just 25 minutes to lead Clemson to an upset of #1 ranked North Carolina, just the second victory over the number-one team in Clemson history.

“I wish Will the best,” said Clemson Head Coach Larry Shyatt. “I totally support his decision. He has done a thorough job in studying this situation. “He has made a great contribution to our program the last three years. He had many memorable nights as a Clemson Tiger. Will has demonstrated to me that he is an NBA caliber player. He is driven to reach that goal.”