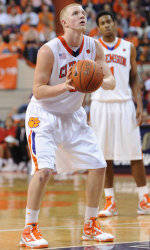 GREENSBORO, NC – Clemson sophomores Tanner Smith and Andre Young were among 12 players named to the 2010 All-ACC Academic Team for men’s basketball on Wednesday. This is the second straight year Smith has been named to the team. He was one of four repeat selections named to the 2010 team, along with Jerome Meyinsse (Virginia), Tyler Zeller (North Carolina) and Brian Zoubek (Duke). This was Young’s first honor.

Smith is the first player for Clemson since Shawan Robinson to be named All-ACC Academic in each of his first two seasons. Robinson was the Tigers’ only four-time selection to the team. To be eligible for consideration, a student-athlete must have earned a 3.0 grade point average for the fall semester and maintained a 3.0 cumulative GPA during his academic career.

Smith, a marketing major from Alpharetta, GA, has started all 29 games this season for the Tigers at shooting guard. He ranks fourth on the team in scoring at 8.9 points per game and third with 4.2 rebounds per game. He is also fifth on the squad with 35 steals. He was previously named to the Academic All-District III Team last month by the College Sports Information Directors of America (CoSIDA).

Young, a health science major from Albany, GA, ranks third on the team in scoring at 9.2 points per game and leads the Tiger team with 54 three-point goals and 50 steals. Young has started three games, but has averaged 26.1 minutes per contest this season.