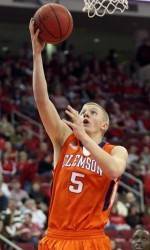 Smith ranks second on the team in rebounding and third in scoring this season. He has improved his scoring average (3.6 to 10.0), rebound average (1.8 to 4.3), and free throw percentage (66.7 to 71.8) from his freshman season in 2008-09 to the current season. He has started all 22 games at the shooting guard position for the Tigers.

The 6-foot-5 Smith sports over a 3.3 cumulative GPA in marketing and was a member of the ACC’s All-Academic Team as a freshman. He is the first CoSIDA Academic All-District selection from Clemson since Cliff Hammonds earned the recognition in 2008.