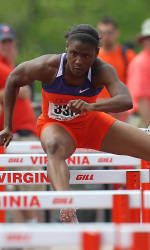 CLEMSON, SC – The Clemson track & field program will travel a small, but formidable group of student-athletes to Philadelphia’s Franklin Field for the running of the 118th Penn Relays. The largest annual meet in the United States will feature well over 15,000 athletes from all levels competing in front of over 100,000 fans over a three-day span.

The Tiger track & field program has won seven relay championships at the prestigious meet, including as recently as 2010 when the men’s shuttle hurdle relay took first place. Clemson’s men also won the shuttle hurdle relay in 1992, 1997 and 1998 under the late Bob Pollock. In 1999, Pollock’s team won the 4×100 and sprint medley relays. The women’s program has one victory, the sprint medley relay in 1992.

Clemson’s shuttle hurdle relays will be among the favorites in both races Friday. The men’s team features two members that helped win the relay in 2010, Marcus Maxey and Charlton Rolle. They will be joined by the ACC’s runner-up in the 110 hurdles, Spencer Adams, and freshman Elijah Britton. Clemson’s men have a best of 55.38 from Florida Relays earlier in April.

The women’s shuttle hurdle team will be without NCAA indoor runner-up Brianna Rollins, who is not running due to a violation of team rules. Clemson will compete recently crowned ACC 100 hurdles champion Bridgette Owens and 400 hurdles winner Keni Harrison, along with All-ACC hurdlers Jasmine Edgerson and Monique Gracia. LSU, an eight-time champion in the event, is also one of the favorites Friday. The meet record is 52.50, set by Texas A&M in 2010. Clemson’s team set a school record earlier this season at Florida Relays with a time of 52.87.

The women’s 4×2 will be a strong contender as well Friday. Dezerea Bryant, the ACC champion, and Marlena Wesh, runner-up, lead the group. The two raced to times of 23.05 and 23.06, respectively, last weekend in Charlottesville, VA. Other candidates for the 4×2 include Edgerson, Gracia and Owens. Other contenders in the event include LSU, who has won the relay a record 11 times, and Texas A&M, who has won three of the last four years.

The sprint medley relay will feature a lineup of Owens, Bryant, Wesh and recently crowned ACC steeplechase champion Alyssa Kulik. She has Clemson’s best 800-meter time this season, running 2:10.50 at Florida Relays. Kulik was the steeplechase champion last season at the Penn Relays. Auburn, LSU, Mississippi State, North Carolina, Penn State and Texas Tech are also slated to compete in the event. LSU has won it the past five years.

Also, in case you missed it, here are some highlights from the 2012 ACC Outdoor Track & Field Championship, where the Clemson women’s team won its third straight outdoor title.