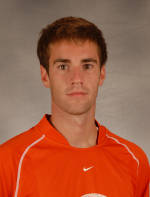 Blaise started all 18 matches for the Tigers as a freshman in 2008. He was named to the All-ACC freshman team last fall. Michael Brooks, a senior, was Clemson’s leading scorer with six goals and one assist for 13 points.

Drake finished the year with one goal and two assists for four points. Eckhardt and Newton are both juniors and play the position of defenders for the Tigers. Eckhardt has played with the US U20 National Team and has been named All-ACC and All-South during his career. Newton was named third-team All-South in 2008 and was named second-team All-ACC last season. Both Eckhardt and Newton were named to the 2007 All-ACC Academic team.

Keegan Priest played in 15 matches and finished the season with two goals and four assists for eight points.

To be eligible for consideration for the All-ACC Academic team, a student-athlete must have earned a 3.0 grade point average for the previous semester and maintained a 3.0 cumulative average during his academic career.

Clemson and Duke, which recorded a record-high eight selections in 2006, led all schools with six honorees apiece on this year’s academic team. NC State tabbed five selections on the 2008 academic team, while Maryland, Virginia Tech and Wake Forest notched three student-athletes each on the squad.