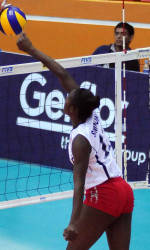 LIMA, PERU – Rising sophomore Mo Simmons made a huge impact in Team USA’s second round, 3-0, win against the Dominican Republic in Lima, Peru at the Junior World Volleyball Championships. The Tiger right side registered four kills, six blocks, and an ace in helping the U.S. to a 4-0 record in the tournament. Simmons now ranks third in the entire tournament in blocking, as she has turned away 15 total attacks in the four matches. Her athleticism has been on display for the world to see. Wednesday’s match against Italy will be available to view live on the internet at 7:15 pm EST. If the Americans can get through the Italians, it sets up a showdown with tournament host Peru on Thursday for a spot in the World Semifinals. For the Tournament, Simmons has registered 15 blocks, 17 kills, and two aces and has started 12 of 13 sets for the Red, White, and Blue.