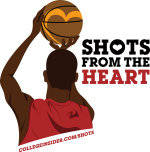 BOSTON – CollegeInsider.com is pleased to announce the creation of ‘Shots from the Heart,’ a project designed to help raise awareness for the growing problem of heart disease. College basketball coaches will compete against one another in a free throw shooting tournament, which will benefit the American Heart Association. The event will also pay tribute to the late Skip Prosser who passed away on July 26, 2007 of a heart attack.

Greenberg will compete in the head coach tournament which will begin on Nov. 15. Winners will advance to the next round, which will be competed the following month, culminating with a free throw final contested at the 2011 Final Four in Houston.

Coaches will not have to actually compete against each other on the same court. Each coach will shoot 25 free throws at his convenience. A member of the athletic department will tally the results and the coach with the most makes would advance. To avoid ties, 1-20 shots made are worth one point, shots 21-24 are worth two points and shot 25 is worth three points.

There will also be a tournament for assistant coaches. Clemson’s director of basketball operations, Dick Bender, will participate in this event.

“The idea was to create awareness for heart disease through competition,” says CollegeInsider.com co-founder Angela Lento. “We wanted to create something that coaches could have fun with. The fun but competitive nature of this event is something that I am sure coach Prosser would have enjoyed.”

Skip Prosser spent 21 years as collegiate head coach at Loyola (MD), Xavier and Wake Forest. He made 18 postseason appearances and is the only coach in NCAA history to take three separate schools to the NCAA Tournament in his first year coaching the teams. In 2008 CollegeInsider.com created the Skip Prosser Man of the Year Award, which is given annually to the coach who not only achieves success on the basketball court but who also displays moral integrity off the court as well.