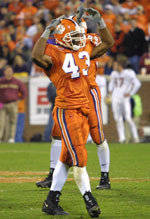 Seven Tigers Will Have NFL Opportunities

Seven members of Clemson’s 2004 football team will have a chance to play at the next level. Former Tigers Justin Miller, LeRoy Hill and Airese Currie were all selected in the NFL draft held over the weekend and four more members of the team have signed free agent contracts within the last two days.

Miller was taken in the second round, the 57th pick of the draft, by the New York Jets. The cornerback who entered the NFL draft after his junior year, was the first Clemson player drafted by the Jets in 27 years. Roy Epps, a safety on the 1977 Clemson team, was selected in the eighth round by the Jets in 1978. The last former Tiger to play for the Jets was Jim Bundren, an offensive tackle and center who played with that franchise in 1998.

Miller had 54 tackles and three interceptions this past season for the Tigers. He also led the nation in kickoff return average with a 33.1 figure and was 21st in punt returns with a 13.0 figure. Miller was a second-team All-American as a kick returner and was named second-team All-ACC as a defensive back. He leaves Clemson with a 30.7 career average in kickoff returns, the best in ACC history and the fourth best in NCAA history.

Hill was named the ACC Defensive Player of the Year and he led the Tigers in tackles with 106, including 19 for loss and eight sacks. He ranked in the top 15 in the nation in tackles for loss and sacks on a per game basis. Hill continued Clemson’s tradition of outstanding linebackers as he is the sixth Tiger linebacker in the last eight years to be selected in the NFL draft. He played in both the Senior Bowl and the East-West All-Star Game and was named the Defensive MVP for the South team for the Senior Bowl.

Currie was a fifth round selection, the 140th pick of the entire draft, by the Chicago Bears. The senior wide receiver from Columbia, SC is the 12th former Tiger to be drafted by the Bears, the first since Stacy Long was an 11th round pick in 1991. The Bears have a history of former Tigers on the team, including the 1985 Super Bowl Championship team that included former Tiger quarterback Steve Fuller and former Clemson middle guard William Perry. Former Clemson All-American Donnell Woolford also played for the Bears.

Currie led the ACC in receptions with 61 and in reception yards with 868. He was the first Clemson receiver to lead the ACC in both categories and earn first team All-ACC since Perry Tuttle did it in 1980. Like Hill, Currie played in the Senior Bowl this past season, and was named Clemson’s MVP on offense.

Percentages are in favor of the three Tigers who were drafted. Since 1990, 32 of the 35 Clemson players who have been drafted within the first five rounds, have made an NFL team. The odds are especially high for Miller and Hill, as each of the last 23 Clemson players who have been taken within the first 100 selections of the draft have made an NFL roster.