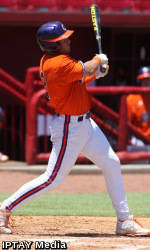 Seven Tigers were selected in the 2012 Major League draft from June 4-6. The seven picks tied for eighth-most in the nation and tied (with Florida State) for most by an ACC team. Arizona State led the nation with 10 draft picks. The 2012 draft only lasted 40 rounds, 10 less than previous years.

Junior corner infielder Richie Shaffer was a first-round draft selection (#25 overall) by the Tampa Bay Rays on Monday. He became the 15th first-round draft pick in Clemson history and the first Tiger in history to be drafted by the Rays.

Two Tigers were chosen on the second day of the draft on Tuesday. Junior catcher Spencer Kieboom was a fifth-round draft pick (#174 overall) of the Washington Nationals. Junior righthander Kevin Brady was a 10th-round draft pick (#338 overall) of the Philadelphia Phillies. It was the second time Brady was selected, as he was a 17th-round pick by the Cleveland Indians in 2011.

With the seven selections, Jack Leggett has had a total of 96 players drafted in his 19 seasons as head coach at Clemson. A total of 17 of those 96 players were drafted twice, meaning a Tiger has been drafted 113 times in his tenure. Thirteen more Tigers have signed free-agent contracts as well.