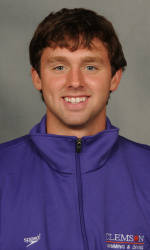 CLEMSON, SC – Clemson swimmer Seth Broster was named to the second team Academic All-District men’s at-large team by ESPN The Magazine Thursday. The sophomore from Lexington, KY has a cumulative GPA of 3.82 in engineering.

Broster was recognized by the ACC for his academic achievements this season as he was named to the All-ACC Academic Team for 2009-10. He had a strong season in the pool as well as he earned five NCAA B times in five events at the ACC Championships as a sophomore. The team named him the most dedicated in the weight room at the post-season awards banquet.