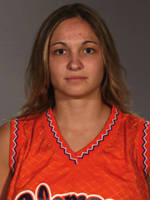 Tabitha Vasilas came to Clemson on a leap of faith.

Prior to joining the Lady Tigers in 2000, Tabitha had established herself as a prolific scorer. As a two-year starter for Southern Wesleyan University in Central, SC, she averaged nearly 16 points per game her freshman year and over 17 points per game her sophomore year en route to all-conference honors. In addition, she was an Honorable Mention all-American and was named to the All-Regional South team both seasons.

Following her second season at Southern Wesleyan, however, Tabitha was ready for a change, and she saw an opportunity to achieve her lifelong dream of playing Division-I college basketball at Clemson, which was just a few minutes away on Highway 93.

“I transferred here on a leap of faith,” said the 5′ 6″ guard from Belton, SC. “I came from a place where I had established myself, and where I was the leading scorer. I just came on a leap of faith and I trusted that my abilities would pay off, and they have.”

Tabitha decided to transfer to Clemson when she became unhappy with her situation at Southern Wesleyan. Despite her list of accolades, she did not feel comfortable with her teammates or the coaching staff, and she also realized that time was running out for her to achieve her dream of playing at the premier level of college basketball.

Tabitha approached Head Coach Jim Davis and his staff prior to the 2000-01 season about her chances of playing for the Lady Tigers. After earning a spot on the roster, however, her transition period to Clemson became difficult. She was forced to red-shirt her first year on the team and during her second year, she felt like she did not get the playing time she had earned and deserved. Although she played in 13 games for the Lady Tigers and scored a season-high five points versus Winthrop on December 15, 2001, Tabitha saw her basketball career headed towards a crossroad. Unsure of her future at Clemson, she approached Coach Davis before this season and submitted a list of personal goals she had created, hoping to demonstrate to her coach the burning desire she had to contribute more to the team.

“At the end of last season, I realized that this could be it,” Tabitha said. “My basketball career could have been potentially over, and I decided that I had to make an effort to step up my role on the team. I was not sure if Coach Davis wanted me to return to the team, so I remained determined and I made a list of goals. I told him that these were the things I wanted to be able to do.”

Tabitha worked hard all summer and entered this season believing that she had improved her game. Judging by her numbers and increased playing time, the coaching staff believed she had too. She has seen action in 23 games this season, averaging over seven minutes per game, and she has quadrupled her scoring average. Not only that, she is currently third on the team in three-point field goal percentage, averaging 33 percent from behind the arc.

“I was somewhat hesitant to approach Coach Davis and tell him how much more I wanted to contribute,” Tabitha said as she recalled last summer. “I did not know exactly where I was in his mind or what he thought my role was on the team. I think I have improved a great deal though, and I think that is evident by how much playing time I have gotten this year and also by Coach Davis’ confidence in me and my abilities.”

“Tabitha may have improved more than anyone on our team from the end of last season to the beginning of practice this year,” said Coach Davis about her improvement. “She is an outstanding shooter and has worked extremely hard to become better in every phase of her game.”

The previous experience that she gained at Southern Wesleyan certainly helped Tabitha’s confidence as she made the transition to Clemson, in search of a new and much-needed challenge. She admits, however, that she could not have taken this step or gotten to where she is without some help from others.

“The people who have surrounded me throughout my life have definitely had an effect on who I am,” she said. “I think about my high school coaches and the impact they had on my life. What they did for me is really un-describable, and they may not even know it.”

“When I think about the tough times that I have been through, the times when I wanted to give up or throw in the towel, I think about a verse in the bible, Jeremiah 29:11,” she added. “This verse is the main thing that kept me going. It reminded me that God is in control of everything and that things will work out for the best for both me and him.”

While her friends and her faith helped her make the transition to the next level, Tabitha said that the influence of her mother might have been the most powerful force she experienced as a youth. As a result, she believes that her mother’s influence was crucial in helping her realize her dream.

“She is wonderful,” Tabitha said as she spoke of her mother, Sally Vasilas. “I would not be where I am without her. While I grew up, she worked two full-time jobs, went to school and still took the time to take care of me. She was always there if I needed anything. I cannot say enough about her. She has definitely had a strong impact on who I am and where I am headed.”

Tabitha Vasilas has enjoyed a tremendous experience as a member of Clemson’s Lady Tiger basketball team. She has realized her lifelong dream of playing Division-I college basketball and she has seen herself reach heights that she never knew before. Looking back on her time at Clemson, she says that her teammates, her friends and her rekindled strength in her faith are some of the things she will take with her when she graduates.

“I made it, I did it,” she said as she spoke about her career. “I am going to remember that it took a lot of guts to get here, and that gives me a sense of accomplishment. Other than that, the friendships I have built with my teammates and the life lessons that the coaches have taught us are the things I will remember the most. By playing basketball, you learn to deal with so many things, like ups and downs, pressure and times when things do not go your way.”

“My experience here at Clemson has been the best,” she added. “I did not get here on my own though. The Lord made it possible for me to come here for some unknown reason, but he is definitely in control and has makes opportunities like this one possible for me and for others.”